New York City Mayor Eric Adams is grappling with not only the reality of public safety, but the “perception,” he said during a recent interview, as Big Apple crime is up 43% year-to-date compared to the same time in 2021.

Adams spoke to CBS “60 Minutes” to talk crime, coronavirus, his childhood and his history with police – he says he was once assaulted by police officers at the 103rd Precinct station house, and later became a cop, himself.

On the heels of the Brooklyn subway shooting that left 29 people injured, including 10 people who were shot, Adams was asked what he would say to New Yorkers who feel the city is “headed in the wrong direction in terms of crime.”

“We’ve moved 1,800 guns off the streets of our city since I’ve been elected, 1,800,” he said during the interview that aired Sunday. “And so, we’re putting in place the foundation of dealing with the immediate needs of violence, but we’re also stopping the pipeline that causes children to get involved in violence.”

New York Police Department (NYPD) statistics released last week show that overall crime is up 43% year-to-date as of April 17 compared to the same time last year. Every area of crime other than murder is up year-over-year, statistics show.

Adams also noted that city residents “got so fed up” amid reports of “abusive policing” city- and nationwide that “they turned the ship too far in the wrong direction.”

Adams told CBS the “perception” of safety in the city “is as powerful as the reality.” 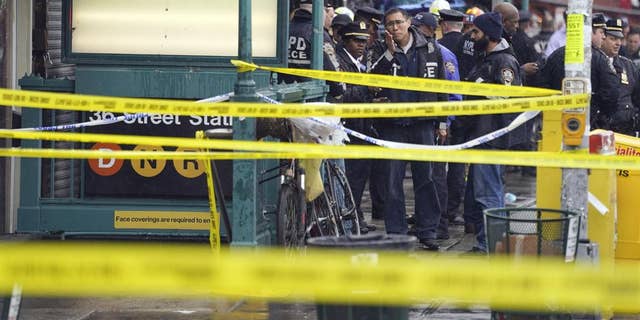 “Because if you wake up in the morning, and you hear that someone was hit in the head with a hammer, then you are, number one, reluctant to get on the subway system,” Adams said, referring to an attack from earlier this year, when New York City scientist Dr. Nina Rothschild was viciously attacked and robbed by a man with a hammer.

He went on: “And then if you’re on the subway system, and you’re seeing disorder, encampments, people laid out on the train, loud noises … or cursing, then you begin to actually embody what you read, and it becomes your perception, even if you were not attacked.”

The mayor said the city needs to deal with the perception “that is being fed to New Yorkers.”

Since his time in office, Adams has reinstated the NYPD’s gun-focused anti-crime unit under a different name, launched a plan to try to clean up the subways, and rolled out a new strategy aimed at targeting low-level crime offenders in an effort to stem violent crime before it starts.

From April 11 through 17, murders in New York City were up 50%, from six in 2021 to nine this year, the NYPD said. Shooting incidents increased 32% year-over-year, and the number of gun victims jumped 100%, largely attributed to the Brooklyn subway shooting tragedy. Transit crimes, or those that were reported in the subway system, were up 51.6% year-over-year for the week, statistics show.