MEXICO CITY, Mexico – Protests and riots in Ecuador could mean problems for the U.S., as analysts claim democracy in the South American nation is under threat. In recent weeks, the government of President Guillermo Lasso has faced increased protests over demands to reduce the prices on certain products. Some observers claim the protesters are seeking to destabilize and overthrow the Lasso government.

The protests have been mostly led by Indigenous groups who blame the government for not complying with their demand to reduce fuel prices, control prices on agricultural products and set a larger budget for education. But some conservative analysts say this is just an excuse to stage a coup against the government because leftist groups want to take power at any price.

Experts say that reports that the government might have to close down the country’s oil wells due to the unrest won’t have much impact outside of Ecuador.

“Ecuador produces less than half a million barrels of oil per day, so it can hardly influence the world price of oil. But oil and derivatives constitute more than half of Ecuadorian exports. Fuel prices are global but here they are subsidized and that is what they are negotiating now: the size of the subsidy. In Latin America, only Venezuela subsidizes them more than Ecuador,” explained Ecuadorian analyst Gabriela Calderón, a research associate at the Cato Institute.

Calderón told Fox News Digital from Guayaquil that, “There are three problems: drug penetration, radicalization of the indigenous political leadership, and the largest block in the national assembly are correistas: always looking for an excuse to destabilize any government that is not theirs. They all want to overthrow the president.” Correistas are supporters of former president Rafael Correa. 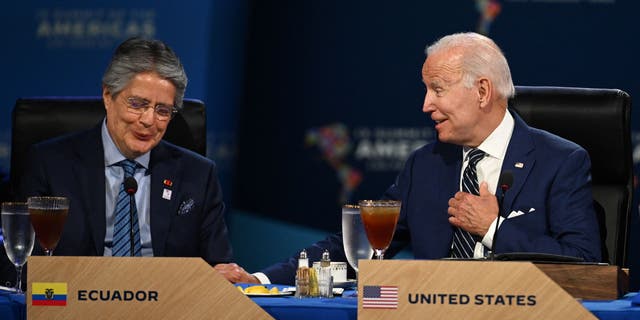 Analysts say the political crisis and rioting has put the pro-U.S. government of President Guillermo Lasso at risk of falling. A former banker, the conservative Lasso, won last year’s presidential election against his leftist opponent who was close to former president Correa.

Gustavo Izurieta, a research fellow at Instituto Ecuatoriano de Economía Política (IEEP) explains: “This political crisis has its genesis in drug trafficking. The drugs that go to the United States go by speedboats from the coast of Ecuador to the coast of Central America. That is one route and another is from Ecuadorian ships with export products (bananas, pineapples, shrimp) to Europe.”

Izurieta claimed that: “There was a very strong complicity between the previous governments that were quite close to these leftist movements financed by drug trafficking.” He said symbolic drug seizures from previous governments, have changed to much larger and significant ones under Lasso’s administration.

Observers say that former leftist president Rafael Correa, who left office in 2017, is a fierce opponent of the present government and still maintains enormous influence and seeks to return to power at any price, and the radicalization of the indigenous group protesting, known as CONAIE (Confederation of Indigenous Nationalities of Ecuador) is one of his strategies to take power.

One business official, who didn’t want to be named, said the violence in the streets is part of the strategy leftist radical groups use to blame the government for supposedly repressing the citizens. “The streets are not as convulsed as the press and social media report. Most protests are in the capital Quito.”

So far, seven protesters have died since the riots started earlier this month.

MCCAUL: US MUST ‘WAKE UP’ AND INVEST IN LATIN AMERICA TO GAIN EDGE OVER CHINA

Oswaldo Toscano a political analyst and university professor noted that “since 2017, an institutional crisis triggered an economic and social crisis,” he said. “An aggressive economic policy to cut social spending reduced budgets in health and education. The pandemic contained but did not eliminate the risk of a latent social explosion. What is not resolved in politics is resolved in the streets. Lasso continued with the aggressive cut to social issues and that produced today’s social outburst. People in the streets not only support the CONAIE demands, but also want the impeachment of president Lasso.”

Lasso who is facing one of the most decisive moments since he took office said: “Ecuadorians who seek dialogue will find a government with an outstretched hand, those who seek chaos, violence and terrorism will face the full force of the law,” he said, emphasizing that the country must return to normality.

According to The Associated Press, the Indigenous confederation criticized the announcement and said in a press release that it shows that the government is not sympathetic to the millions of people in poverty in Ecuador. 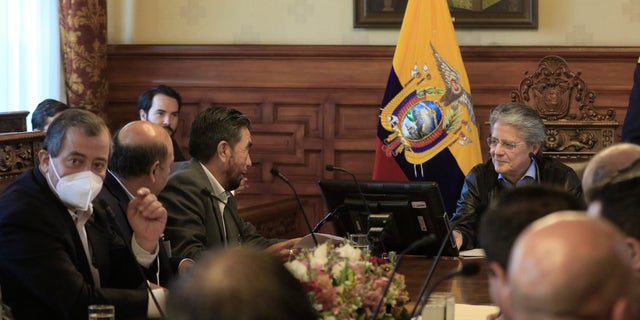 President of Ecuador Guillermo Lasso looks on during the meeting with transport union members as part of the fourth day of national strike to protest against policies of President Lasso on June 15, 2022 in Quito, Ecuador.
(Franklin Jacome/Agencia Press South/Getty Images)

On Saturday, president Guillermo Lasso lifted a state of emergency he imposed in six provinces after government officials held initial talks with protest leaders. It also comes as lawmakers discuss an opposition request to remove Lasso from office amid the strike, which has caused food shortages and hurt the economy.

“As the region turns to the left, Ecuador remains one of the main allies of the United States in Latin America. The collaboration between the two governments has become very strong, and a departure of president Lasso would mean that Ecuador, under the influence of the “correistas,” would return to the orbit of China and Russia. Those of us who believe in the West are convinced that it is better to be with the United States and the European Union than with Russia and China, which have other geopolitical interests and ambitions,” noted Izuriet.

José Isidro Morante, an analyst and partner with the Instituto Ecuatoriano de Economia Politica (IEEP), told Fox News Digital that important decisions need to be made in order to revitalize the economy.

Morante claimed that this was “because the powerful groups put pressure, for example, only super gasoline could be freed from the subsidy, however the prices of other fuels cannot be freed because these powerful groups are the main beneficiaries of cheap fuel. Drug traffickers use fuel as a raw material, the indigenous have groups that smuggle cheap fuel to Peru and Colombia, they also use it for their artisanal and polluting mining extractions.”

Observers believe the next few days will be crucial in defining the country’s future path and warned that Washington must keep a close watch on the outcome.

Armando Regil Velasco reports on Latin American affairs. He can be followed @armando_regil