An active manhunt unfolding at the University of Virginia in Charlottesville on Monday morning cancelled classes as law enforcement scours in and around the grounds for student shooting suspect Christopher Darnell Jones Jr.

In a message to the community early Monday, UVA President Jim Ryan wrote to provide an update on the multiple public safety alerts sent out following the 10:30 p.m. Sunday shooting that killed three and injured two others.

Ryan, in confirming that Jones Jr. is a UVA student, said the suspect remains at large and is considered armed and dangerous. Jones, a former UVA football player, is described by police as a Black male last seen wearing a burgundy jacket or hoodie, blue jeans and red shoes. He might be driving a Black SUV with the Virginia tag TWX3580.

“Multiple law enforcement agencies are coordinating to find and apprehend him,” Ryan said. “As of writing, I am heartbroken to report the shooting has resulted in three fatalities; two additional victims were injured and are receiving medical care. We are working with the families of the victims, and we will share additional details as soon as we are able.”

“This is a message any leader hopes never to have to send, and I am devastated that this violence has visited the University of Virginia,” Ryan added. “I am holding the victims, their families, and all members of the University of Virginia community in my heart today, and we will make plans to come together as a community to grieve as soon as the suspect is apprehended.”

The shooting was initially reported around 10:30 p.m. Sunday when shots were fired in the Culbreth parking garage.

Shortly after, a campus-wide alert was issued announcing the suspect was at large and telling all people at UVA to shelter in place. University police said they are looking for Jones in connection with the shooting.

Anyone who sees Jones is asked to call 911 immediately and not approach him. 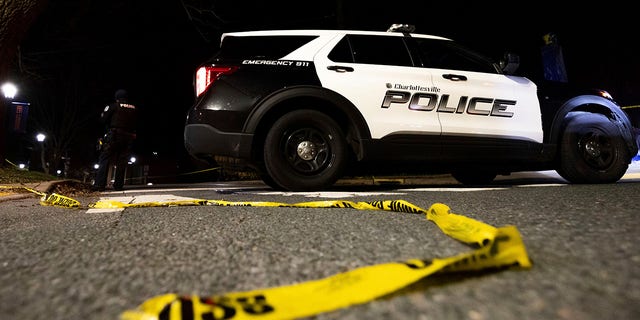 A Charlottesville Police vehicle is parked on Culbreath Road during an active shooter situation on the University of Virginia campus in Charlottesville, Va., on Monday, Nov. 14, 2022.
(Mike Kropf /The Daily Progress via AP)

Vice President and Dean of Students Robyn S. Hadley said Monday that she was on grounds “like many of you.”

“I am sheltering in place and in direct touch with University leadership and UPD,” the message said. “Please, please take the shelter in place commands seriously as the situation remains active. The suspect is armed and dangerous. If you are not inside and safe, immediately seek safety.”

As of 1 a.m., UVA police said to continue sheltering in place and to contact friends and family to let them know “your status.” 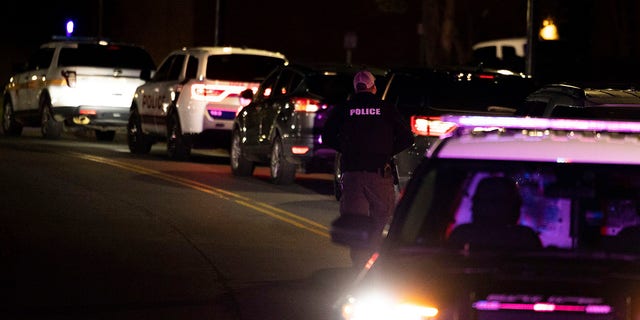 A police officer walks up Culbreath Road during an active shooter situation on the University of Virginia campus in Charlottesville, Va., on Monday, Nov. 14, 2022.
(Mike Kropf /The Daily Progress via AP)

Early Monday morning, UVA police said three people were killed, and two others were injured in the shooting. Further details were not immediately available.

Fox News Digital reached out to University of Virginia police, but have not yet heard back.

This is a developing story.