A 15-year-old teenager reportedly has been killed in eastern Ukraine while trying to help evacuate animals from a zoo.

The Feldman Ecopark outside the city of Kharkiv – which has seen rampant fighting during the war – said Wednesday that “during the evacuation of buffaloes… the team of our employees and volunteers got under fire.”

“One person died. Two people were seriously injured. Doctors are fighting for their lives,” it posted on Facebook.

Two evacuated white lions from the Feldman Ecopark are seen in an enclosure at the zoo in Odesa, Ukraine, on April 14.
(STR/NurPhoto via Getty Images)

“The deceased boy was only 15 years old,” the zoo added, noting that “he helped his parents to feed and evacuate the animals.”

“The blessed memory of the hero will always remain in our hearts,” Feldman Ecopark also said in a statement. “This is the sixth victim from among members of our team.” 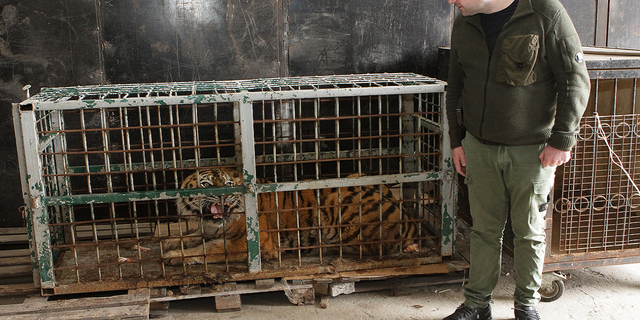 Earlier this week, a grisly image emerged purportedly showing bodies of Russian soldiers arranged in the letter “Z” after Ukraine’s military recaptured a village near Kharkiv. Firefighters extinguish a fire following a Russian bombardment at a park in Kharkiv, Ukraine, on Tuesday, May 3.
(AP/Felipe Dana)

The Associated Press described the area where its photographer took the image as having “the feel of an open-air morgue, where the dead lie unclaimed and unexplained, sometimes for weeks on end, as Ukrainian and Russian forces fight for control of slivers of land.”