A Texas small-town police department refused to apologize for a selfie one of its officers snapped with Kyle Rittenhouse amid a slew of online criticism, noting how the now 19-year-old was acquitted by a jury of his peers in the August 2020 shooting of three demonstrators in Kenosha, Wisconsin.

“Make those stops, you never know who you might meet. Today it was Kyle Rittenhouse, welcome to Texas,” the Thrall Police Department, which serves the city outside of Austin, wrote in a Facebook post on Thursday, sharing a selfie of an unidentified officer smiling with Rittenhouse.

After receiving an outpouring of negative comments on the post, the Thrall Police Department added a paragraph hours later, writing: “I must have missed something, I believed that this young man was arrested, charged, indicted and then found not guilty by a jury of his peers.”

“Is this not how our country works anymore?” Thrall police added. “The hate in these comments is terrible, if you have information that is contrary to that I would honestly love to hear it.”

Rittenhouse was 17 and living in Illinois when he answered calls online to defend businesses during rioting unfolding in nearby Kenosha, Wisconsin, in August 2021 in response to the police shooting of a 29-year-old Black man named Jacob Blake while officers responded to a domestic dispute.

Rittenhouse testified that he fired in self-defense, and his legal team showed video suggesting that protesters first chased down and attacked the then-17-year-old before he fired his rifle. In November 2021, Rittenhouse was acquitted by a jury on all charges stemming from the shooting during racial justice protests despite being vilified by left-leaning media as an alleged white supremacist. 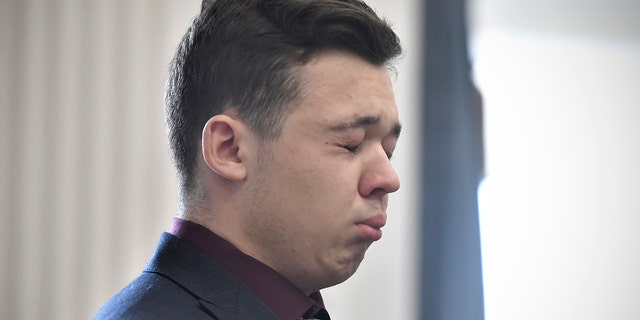 Kyle Rittenhouse cries as he is found not guilty on all counts on November 19, 2021, in Kenosha, Wisconsin, in the shooting of three demonstrators.
(Sean Krajacic – Pool/Getty Images)

“Sick you are making him out as a hero. Shame on your officer and this department,” one Facebook user, Kari Ashpaugh, of Sattuck, Oklahoma, commented beneath the photo shared by Thrall Police Department of Rittenhouse and the officer smiling.

“I get it, cause both can kill people without repercussions,” another Facebook user, Joshua Davis, whose profile says he attended Lake Erie College, commented.

Several other comments criticized the post as a “disgrace,” questioned if Rittenhouse was stopped for a traffic violation and ripped the selfie as a waste of taxpayer dollars on police work. 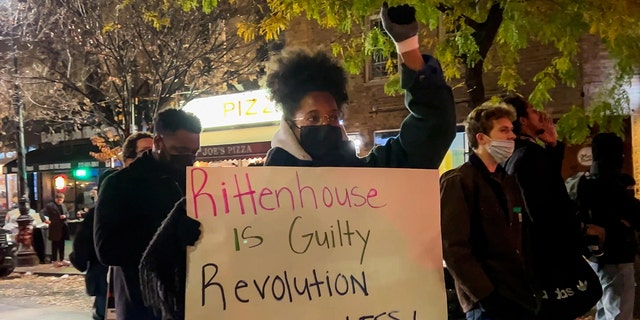 A protester holds a “Rittenhouse is guilty” sign while raising her fist during a protest against the acquittal of Kyle Rittenhouse in the West Village on November 19, 2021, in New York City.
(Alexi Rosenfeld/Getty Images)

“Is this a joke? You’re welcoming a known killer into our state?” Phoenix Woods, of Plano, Texas, commented. “This is completely disgusting.”

A few users did defend Rittenhouse in the comment section.

“Welcome to Texas Kyle and have a great year at school. Ignore these haters. They wouldn’t know bravery [if] it bit them on the rear,” Theresa Lounder, of Conroe, Texas, commented.

The now 19-year-old, from Antioch, Illinois, is reportedly attending Blinn College, a public junior college in Texas, with hopes of eventually transferring to Texas A&M University. Amid organized protests from student groups and an online petition opposing his enrollment, Rittenhouse said last year that he would no longer be attending Arizona State University, where he had planned to study nursing.