The state of Texas is collecting donations from the public to help fund the transportation of migrants to Washington, D.C., and New York City.

“In the wake of President Biden’s decision to end Title 42 expulsions, Governor Abbott has directed the Texas Division of Emergency Management to charter buses to transport migrants to Washington, D.C. You can donate online now by credit card* or donate by mail by sending a check to the address below,” a message reads on the website for the Office of the Governor.

The state has collected $118,297 as of July 22, according to the website for Gov. Greg Abbott’s office. Texas has been billed nearly $7 million from busing and security contractors as of mid-July, the Washington Examiner reported Sunday.

The message from Gov. Greg Abbott’s office notes that unused donations will go to funding construction for a Texas border wall. The state is also collecting donations for that initiative, and has collected $55,334,747 as of July 22.

TEXAS BUSES TAKING MIGRANTS TO NYC SETS OFF FIRESTORM FROM DEMS, ABBOTT TELLS THEM TO TAKE IT UP WITH BIDEN

Texas Governor Greg Abbott announces the reopening of more Texas businesses during the COVID-19 pandemic at a press conference at the Texas State Capitol in Austin on Monday, May 18, 2020.
(Photo by Lynda M. Gonzalez-Pool/Getty Images)

Abbott began sending buses of migrants to Washington, D.C., in April, after conservative leaders had threatened sending migrants to liberal cities and vacation hot spots as the crisis along the border continues.

More than 6,000 migrants have been bused to the city as of August, while the first buses of migrants to New York City began arriving last weekend. Abbott first called for private donations to be made to the transportation effort back in April, the Texas Tribune reported. 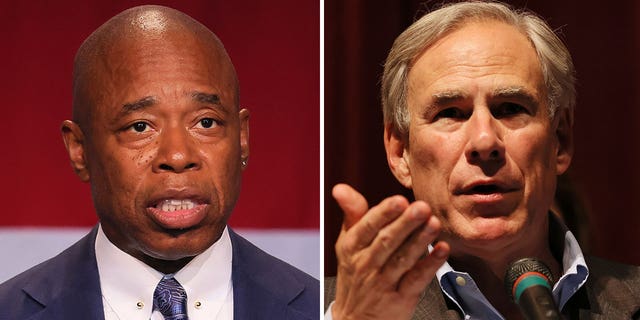 “You cannot take the words of Governor Abbott seriously. He’s demonstrated his moral character with these actions, and they’re disgusting. We do know that people are arriving with a great amount of needs because of the treatment they’ve received in the state of Texas,” Castro said outside The New York Times building in Manhattan last week. “Again, this must be condemned. This must be looked into. And our federal government will … take steps to hold them accountable.” 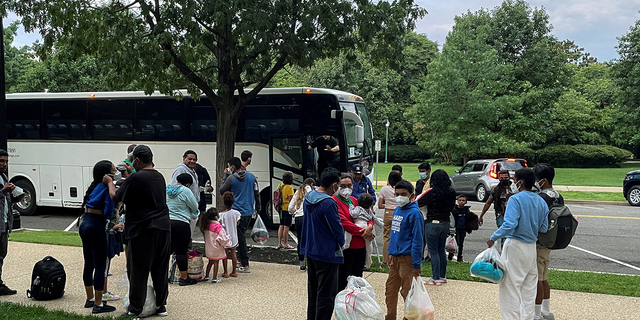 FILE PHOTO: Approximately 30 migrants disembark after arriving on a bus from Texas, at Union Station near the U.S. Capitol in Washington, U.S., July 29, 2022.
(REUTERS/Ted Hesson)

Abbott said Friday that Texas “has had to take unprecedented action to keep our communities safe” due to “President Biden’s continued refusal to acknowledge the crisis caused by his open border policies.”

“If the mayor wants a solution to this crisis, he should call on President Biden to take immediate action to secure the border—something the President continues failing to do,” she added.

Conservative leaders in border states and across the country have slammed the president for his immigration policies, including ending the Trump administration’s “Remain in Mexico” policy, announcing an ultimately-failed plan to offer citizenship to 11 million illegal immigrants at the start of his presidential tenure and loosening border enforcement policies, among other issues.

“As Mayors Adams and [Washington, D.C., Mayor Muriel Bowser] recently acknowledged, the border crisis demands immediate and decisive federal action. I ask that they call on President Biden to stop dismissing this crisis and to honor his duty of preserving America’s national security,” Abbott wrote in an opinion piece on Thursday for Fox News Digital.