A 16-year-old surfer who was bitten by a shark off New York’s Long Island on Wednesday is speaking out.

Max Haynes, was surfing in the waters off of Kismet Beach on Fire Island at around 5:45 p.m. ET, when a shark bit him on his right foot.

“I didn’t see anything coming, I felt on my foot, like, a bear trap,” Haynes, who suffered an approximate 4-inch laceration to his foot, told FOX 5 New York.

The Suffolk County Police Department said he was able to walk out of the water on his own.

“I felt its presence around me when I was paddling back,” he recalled. “I felt movement in the water when I was getting out of there.”

“I think I’m very lucky about the outcome,” Haynes told the station. “It gives me a cool story.”

Lifeguards watch bathers on Long Beach July 21, 2022 in Long Beach, New York. A number of beaches have been closed or restricted after a number of sharks were sighted along Long Island this summer.
(Photo by Bruce Bennett/Getty Images)

No lifeguards were on duty at the time of the attack.

Authorities searched for the shark by helicopter, but the water was too murky to locate the shark, according to the department. Suffolk County Marine Bureau officers were also searching for the fish via boat. 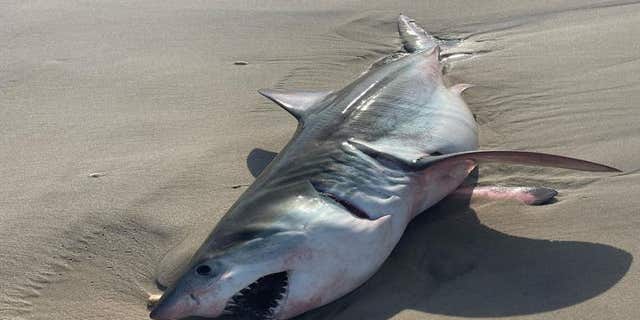 The body of what is believed to be a dead juvenile Great White Shark washed ashore on the beach of the village of Quogue on Long Island.
(Quogue Village Police Department)

On Wednesday, a dead juvenile great white shark washed up on Dune Road Beach in Quogue.

On Monday, New York Gov. Kathy Hochul ordered state agencies to increase surveillance off Long Island, including the use of drone and helicopter monitoring. 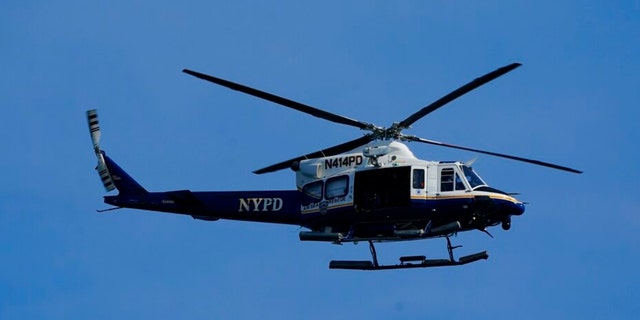 “As New Yorkers and visitors alike head to our beautiful Long Island beaches to enjoy the summer, our top priority is their safety,” the governor said in a Monday release. “We are taking action to expand patrols for sharks and protect beachgoers from potentially dangerous situations. I encourage all New Yorkers to listen to local authorities and take precautions to help ensure safe and responsible beach trips this summer.”

Scientists cite warming ocean temperatures and a resurgence of bunker fish for the increase in sightings. Experts say the shift in the number of sharks is a sign that conservation efforts have been successful.

Fox News’ Stephen Sorace and The Associated Press contributed to this report.

Julia Musto is a reporter for Fox News Digital. You can find her on Twitter at @JuliaElenaMusto.