Police in Florida have arrested two men who allegedly smashed up a Mercedes-Benz car during an apparent argument with a pair of teenagers over speeding in a residential neighborhood.

The incident happened inside a gated community Tuesday evening in Sanford, just north of Orlando, where one of the young men had been visiting a friend, according to Fox35 Orlando. The station says it also has obtained security camera footage showing a white car with its tires screeching as it rounds a corner in the neighborhood 15 minutes before police arrived.

“I was driving a little bit, like, I wasn’t supposed to be driving like that. A guy ran in front of the road, hit my car with a cone, threw a rock through my front windshield and I knew something happened,” one of teens is heard telling a 911 dispatcher in a chaotic call released following the dispute.

Howard Hughes, 61, and his neighbor Donald Corsi, 52, have since been arrested on charges including property damage-criminal mischief, battery and throwing a weapon into a vehicle, the station reports.

Howard Hughes, 61, has been charged with property damage-criminal mischief and battery, according to Fox35 Orlando.
(Seminole County Sheriff’s Office/TMX)

During the 911 call, the teen tells the dispatcher that “my friend started swinging [at] the older dude” and constant shouting can be heard in the background.

“This is a neighborhood where little kids play,” a male voice is heard saying at one point. “And you come running down here like you think you are a race car driver. They were doing doughnuts!” 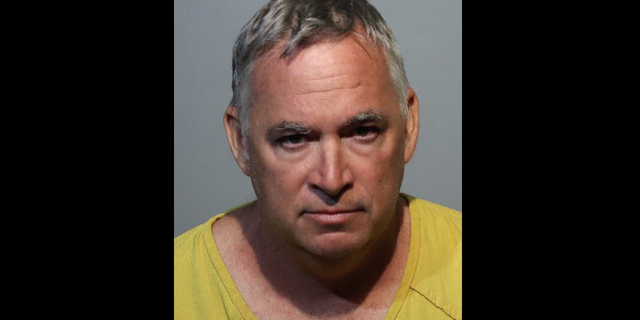 Donald Corsi, 52, is facing charges of property damage-criminal mischief and throwing a weapon into a vehicle, according to Fox35 Orlando.
(Seminole County Sheriff’s Office/TMX)

“I tried to stop you from being a f—— idiot!” another male voice shouts in response.

One of the teens was identified by Fox35 Orlando as 16-year-old Jermaine Jones, who told the station that Hughes and Corsi were trying to get a reaction out of him.

“I knew the reaction they wanted out of me, and I wasn’t going to give it to them. I knew how it could have went if I did give them that reaction. I just stayed calm and got everything on video,” Jones told the station.

Footage taken from the scene by Jones, according to Fox35 Orlando, shows a white Mercedes-Benz sedan with a smashed window and rear driver side damage.