A Russian proxy court this week in Ukraine’s occupied Luhansk region sentenced two staff members of the 57-member Organization for Security and Cooperation in Europe (OSCE) to 13 years in prison over charges relating to alleged treason.

At least two mission members, Dmitry Shabanov and Maxim Petrov, both of whom are Ukrainian, were detained for five months under unknown conditions before they were sentenced in a move U.S. OSCE Ambassador Michael Carpenter on Thursday called a “travesty of justice.”

A destroyed OSCE Special Monitoring Mission to Ukraine vehicle in Mariupol. The battle between Russian/pro-Russian forces and the defending Ukrainian forces led by the Azov battalion continues in the port city of Mariupol.
(Maximilian Clarke/SOPA Images/LightRocket via Getty Images)

“No one, anywhere, should be targeted based on their unbiased and loyal service to this Organization, especially while carrying out duties mandated by all 57 participating States. And that includes Russia,” he said in an address to the council’s permanent members.

Both Russia and Ukraine sit as permanent members in the OSCE, which is a regional security organization that addresses security concerns like arms control, human rights, counter-terrorism, as well as socio-economic, military and political-based issues within its partner organizations.

Helga Maria Schmid, the OSCE secretary general called for the immediate release of Shabanov, Petrov and a third unidentified Ukrainian OSCE official who has also been detained. 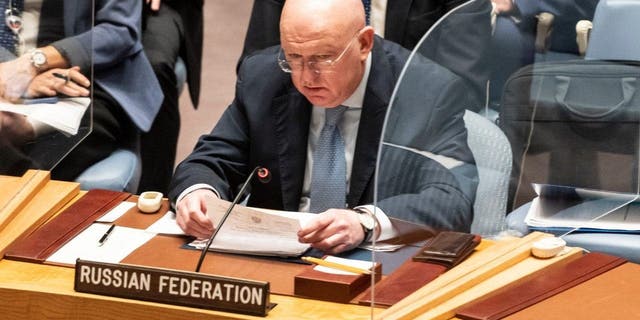 It is unclear where the OSCE members will be sent to fulfill their prison sentences but comes as Russia looks to annex portions of Ukraine, including Luhansk, Donetsk, Zaporizhizhia and Kherson through “referendums” this week.

“Think about this: while one group of Russian mouthpieces sits in this Council, another group is imprisoning the staff who work for this Organization,” Carpenter said in a fiery address Thursday. “It is simply appalling.  We call on Russia and its proxies to release these individuals now.  Immediately.”