A Pennsylvania restaurant is permanently closing a location on Pittsburgh’s South Side after two shootings happened on its doorstep over the weekend.

Fudge Farm, a shop that specializes in burgers, fries and milkshakes announced the decision on Sunday.

“Due to the uncontrollable shootings and violence as well as other circumstances on E Carson St. Today will be Fudge Farm’s last day there,” the company wrote on Facebook.

Fudge Farm, a popular Pittsburg’s South Side spot for milkshakes and burgers, announced that it is closing due to a spike in violent crime.
(Fudge Farms via Facebook)

The restaurant cited the safety of young staffers as a key factor in their decision to close the East Carson location.

The company thanked customers for years of support and plugged the Waterfront restaurant, which will remain open.

VIOLENT CRIMES ON THE RISE IN 2022, FOLLOWING PREVIOUS UNPRECEDENTED SPIKE IN MURDERS 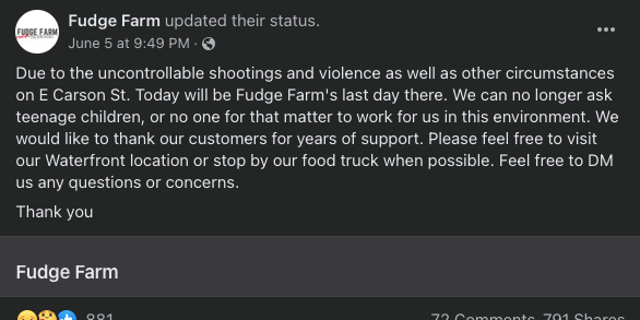 “Anyone that personally knows us, knows that our employees are family,” Fudge Farm elaborated in a Facebook comment. “We wouldn’t allow our daughters to work in this environment as [sic] we wouldn’t want your son or daughter to do so either!”

Fudge Farm also posted a picture of a gun found outside the restaurant shortly after announcing the closure in the wake of Sunday’s shooting. 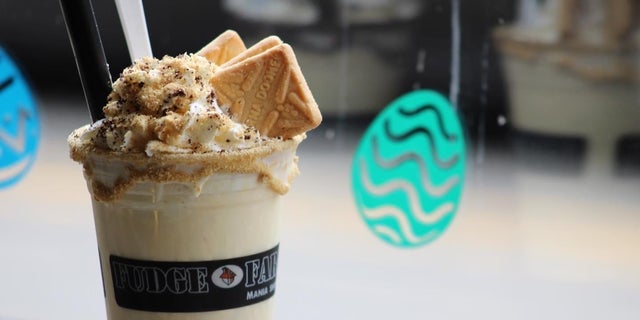 Fudge Farms is a local favorite in Pittsburg’s South Side known for their milkshakes and burgers.
(Fudge Farms via Facebook)

Fudge Farm told KDVA that an employee was violently attacked with a restaurant sign two weeks ago.

“People just came rushing in the door trying to escape the fighting and the shooting. They were running through our kitchen,” business owner Molley Rainey said of Sunday’s shooting. “All I could imagine was one of my employees being shoved into a stove or a deep fryer because it was just mayhem.”