New Hampshire investigators are piecing together the final moments of a married couple found shot to death on a hiking trail last week and asking for the public’s help catching the shooter.

Stephen and Djeswende “Wendy” Reid, 67 and 66, former international humanitarian workers who loved to spend time outdoors, left their apartment in Alton Woods around 2:22 p.m. on Monday, April 18, and traveled about four miles to the Broken Ground Trails hiking area, according to state prosecutors.

The couple had last been seen by family the day earlier and were reported missing on April 20 when Stephen Reid missed a planned family event, according to the Concord Police Department.

A search team found their bodies on April 21 along the Marsh Loop Trail, which encircles a power substation off Portsmouth Street in Concord.

The Reids’ relatives declined to comment but shared a statement from his brother, Brian, originally released to the Manchester-based WMUR-TV Sunday.

They said the couple had met in Washington, D.C., while Wendy Reid, a native of West Africa, was studying on an athletic scholarship. Stephen Reid, her future husband and “soulmate,” had traveled to the region himself to work with the Peace Corps after graduating college. 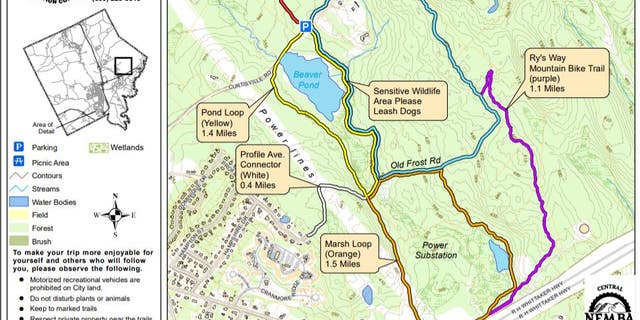 Investigators released this map of the Broken Ground Trails system and are asking for local residents who may have seen anything suspicious to contact them following a shooting that left a married couple dead in the area last week.
(New Hampshire Department of Justice)

He later worked for USAID specializing in international humanitarian projects, and she worked with refugees.

“Steve and Wendy had returned three years ago to his hometown of Concord to enjoy a well-deserved retirement,” the family said. “Steve’s 30-plus year career as an international development specialist in service to the world’s most vulnerable through USAID humanitarian projects could not have been made possible without the love, care and support of Wendy, who also helped recently-resettled refugees acclimate and thrive in the United States.”

An autopsy performed by Dr. Mitchell Weinberg, the state’s deputy chief medical examiner, found the cause and manner of death for both of them was homicide by multiple gunshot wounds.

Authorities are asking anyone who saw the Reids on April 18 or who has any information regarding their final hike to call the Concord Police Department.

They are also asking for area residents to remain vigilant and anyone who may have security cameras on their properties is asked to review their recordings for any signs of the couple or suspicious activity.

Michael Garrity, a spokesperson for the New Hampshire Department of Justice, said investigators had received more than 60 tips in connection with the case as of Monday.

“We are currently asking for tips/information from anyone who was on any of these trails last Monday afternoon, and in particular on the Marsh Loop Trail,” he told Fox News Digital. “Anyone who may have seen anything out of the ordinary.”