Minnesota police arrested six men in a high-speed chase from the funeral of a 19-year-old gunned down at the Mall of America in a shooting that unfolded during the nation’s busiest shopping season last month.

Hudson was shot and killed at the mall on Dec. 23, and St. Paul officers were stationed outside the St. James African Methodist Episcopal Church and Elmhurst Cemetery during Friday’s services. They noticed a man with a handgun and another man wanted for a nonfatal shooting on Dec. 14 were in attendance.

Police say the two men left the funeral in an SUV with five other men.

An officer stands inside Nordstrom at Mall of America after a shooting, Friday, Dec. 23, 2022, in Bloomington, Minn.
(AP Photo/Abbie Parr)

The vehicle pulled into a gas station, where officers tried to stop it, police said. One of the men jumped out of the SUV and tried to run away before officers captured him.

The SUV took off with the two men from the funeral still inside.

Police gave chase but lost sight of the vehicle. They later found it abandoned. Four 19-year-old men and one 18-year-old man were found in the nearby area and arrested. 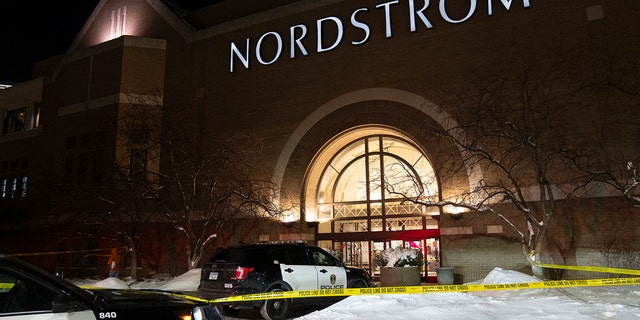 Officials lock down the west wing of the Mall of America after a shooting was reported Friday, Dec. 23, 2022 in Bloomington, Minn.
(Alex Kormann/Star Tribune via AP))

The 18-year-old was the man with the handgun at the funeral. Officers searched the area and found a bag containing a 9 mm handgun and clothes the man was wearing at the funeral, St. Paul Police Sgt. Mike Ernster said. The Dec. 14 shooting suspect who was at the funeral wasn’t found and is still wanted.

Police say Hudson was killed during an exchange of gunfire in the mall’s Nordstrom store on Dec. 23.

A Bloomington police SWAT team later conducted a raid on a home and arrested five suspects, though just four of them have been subsequently charged. 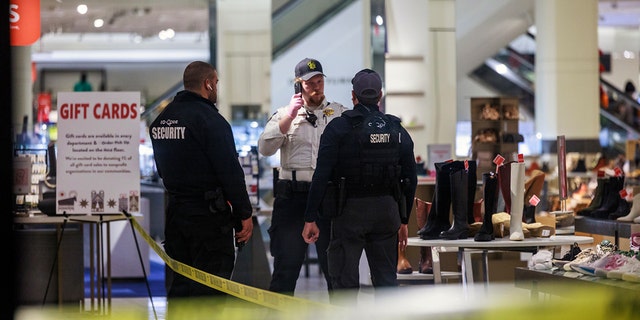 Security officers speak inside a store at the Mall of America in Bloomington, Minn., after reports of shots fired on Friday, Dec. 23, 2022.
(Kerem Yücel/Minnesota Public Radio via AP)

The shooting forced authorities to lock down the nation’s largest shopping center on one of the last days of the holiday shopping season.