A Marine Corps investigation into the Osprey crash in Norway in March that left four Marines dead has determined that pilot error was the cause.

The crash on March 18 near Bodo was caused by a “series of maneuvers” at a low altitude that exceeded the maximum 60-degree angle of bank for the MV-22B Osprey, the 2nd Marine Aircraft Wing said in a statement Sunday.

“The steepness of the turn resulted in the loss of both airspeed and altitude, followed by an overcorrected maneuver with a right turn in excess of 80 degrees from which the aircraft could not recover,” the statement added.

It is not known which pilot was in control of the aircraft at the time of the deadly crash.

US MARINE CORPS AIRCRAFT WITH 4 ABOARD CRASHES IN NORWAY

This photo shows wreckage at the site of a plane crash of a V-22B Osprey aircraft belonging to the U.S. Marine Corps, that went down during NATO exercises on March 18, 2022, in a remote steep wooded area in Norway.
(Cornelius Poppe/NTB/AFP via Getty Images)

Prior to the crash, the Osprey had refueled and taken off on an “approved flight plan in clear conditions,” south of Bodo. 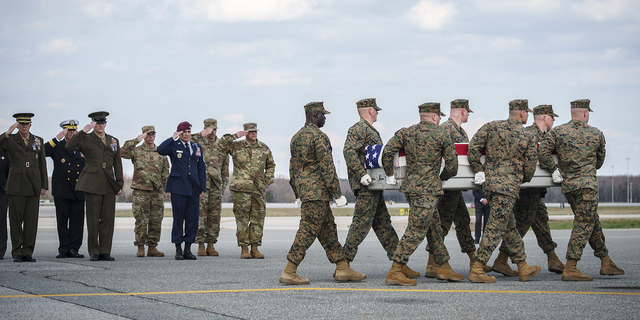 At 4:22 p.m. local time, the aircraft entered the Gratadalen Valley where it deviated from the authorized flight path one minute later and crashed, killing the four Marines, officials said.

The investigation found from recovered pieces of the aircraft that a left turn was taken at 68 degrees resulting in an overcorrection. 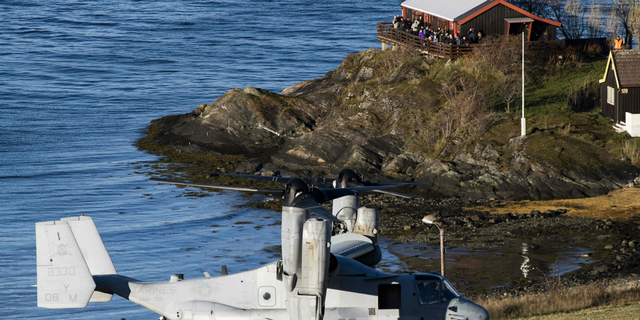 A United States’ V-22 Osprey, a multi-mission, tiltrotor military aircraft with both vertical takeoff and landing, lands to pick up Marines during a joint demonstration as part of the NATO Trident Juncture 2018 exercise in Byneset near Trondheim, Norway, on Oct. 30, 2018.
(Jonathan Nackstrand/AFP via Getty Images)

“Their loss continues to be felt across the Marine Corps, and our condolences remain with the family and friends of the fallen,” the 2nd Marine Aircraft Wing said.