A Los Angeles city councilman is raising questions about a burglary involving U.S. Rep. Karen Bass, a mayoral candidate whose home was broken into earlier this month.

City Councilman Joe Buscaino is asking Los Angeles Police Chief Michel Moore and City Attorney Mike Feuer for answers about the theft in which only two guns were stolen despite the weapons being secure, and why Bass’ guns were targeted.

He called the circumstances of the burglary “very troubling” and expressed concern about the “lack of information being provided to the public.”

“While the news of the burglary itself was shocking, what was even more unnerving was the fact that the only items stolen were two guns,” the letter authored by Buscaino reads. “Karen Bass’ mayoral campaign explicitly stated that despite there being cash, electronics, and other items available, the only items missing were two guns that were, according to them, ‘safely and securely stored.'”

Fox News has reached out to Moore, the LAPD and Feuer’s office.

Bass, a Democrat, previously told Fox Los Angeles the weapons were registered and stored in a safe and stashed in a closet. She said she purchased them years ago for protection.

“I had guns for personal safety, as do many people. I think that gun control is extremely important,” she said. “But I have never believed that people – if they wanted to have guns – should not have them.”

Buscaino called the burglary a “teachable moment” to the public about the city’s safe storage gun law, which requires firearms to be stored in a locked container or disabled with a trigger lock approved by the CA department of justice.

Among his questions, he is asking if Bass’ guns were in an approved container or trigger lock and if so, how were the thieves able to “penetrate those safety measures” and why have details about the crime have been withheld from the public.

“I would like a response to these questions to ensure the public can get a true picture of what occurred with our next potential Mayor and her ability to follow the laws of Los Angeles relating to safe and secure storage of guns,” he wrote. 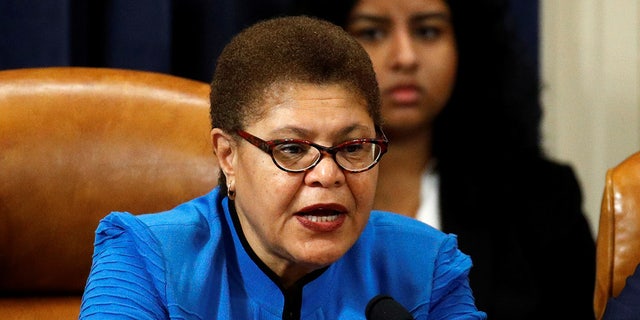 Rep.  Karen Bass, D-Calif., has been brought up by prosecutors in connection with a case against a former USC dean.
(Reuters)

The incident prompted Bass to express misgivings about safety in Los Angeles after saying months ago during a debate that she said she felt safe in the city.

“I would say a 10. But I do understand that a lot of people around the city do not feel safe, and I respect that.”