LAS VEGAS, NEVADA – The drought in the west has gotten so bad that bodies, World War II boats and other artifacts have resurfaced at Lake Mead, about 30 miles from the Las Vegas Strip.

As the water dries up, so-called “water cops” are going after anybody who’s wasting it.

Water waste investigators with the Las Vegas Valley Water District patrol the roads and neighborhoods every day to hunt for violations like broken sprinklers and excess watering.

Nevada has taken a first-in-the-nation measure to reduce the consequences.

A new law bans non-functional grass, or grass that’s purely decorative like at some office buildings and along sidewalks.

“If the only person who ever stands on the grass is pushing a mower, it’s probably nonfunctional, so the grass that you see in business parks like this, nobody’s picnicking out here,” said JC Davis, enterprise conservation manager with the Southern Nevada Water Authority. “The only reason I’m standing on it is because we’re doing an interview.”

Functional grass is often found at parks and schools, for example.

Athletic fields, cemeteries and most residential properties are exempt from the ban.

But about 70 percent of homes have voluntarily removed their lawns, replacing them with artificial grass or desert-friendly plants that don’t require much water.

“When you have real grass out here in the front yards out here in Las Vegas, they’re not they don’t really serve much of a purpose,” said Cameron Donnarumma, a water waste investigator. “I’ll see a yard that (is full of grass), and then a few weeks later, I’ll see it all ripped out, so I think we are making quite a difference.”

If homeowners decide to convert to desert landscape, they can receive a rebate of $3 per square foot.

Most of the violations the patrol team sees result in warnings instead of fines. 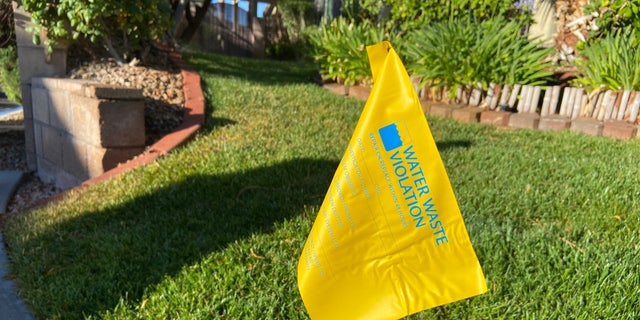 Las Vegas water patrol teams hunt for violations. They issue more warnings with yellow flags planted in the ground than they do citations or fines.
(Fox News/Ashley Soriano)

MILLIONS MUST CUT WATER USE IN DROUGHT-STRICKEN CALIFORNIA

During the first six months of this year, the city received 1,643 reports about water waste, which is more than double the same time last year, according to Crosstown, a nonprofit news organization based out of the University of Southern California Annenberg School of Communication and Journalism.

589 calls were made in June, the highest total on record passing the previous record from May 2021 with 314 calls.

In addition to a two-day watering schedule in Los Angeles, the city has water enforcers that may place flow restriction devices on homes that have used more than 150% of their allowed water usage for four months. 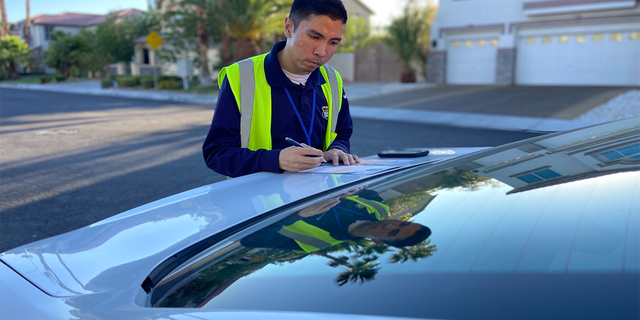 Water enforcement teams like this one in Las Vegas are tasked with spotting water wasters amid the unprecedented drought. Cameron Donnarumma, one of the investigators, issues a warning.
(Fox News/Ashley Soriano)

Meanwhile, officials in Las Vegas voted this week to limit the size of newly-built pools — one more step to prevent the water crisis from getting worse.

Conservation in southern Nevada goes beyond turning off the faucet when you brush your teeth or taking shorter showers. Doing those things doesn’t extend the water supply because all indoor water is recycled.

“Whether it’s in a hotel room on the Las Vegas Strip or in your house or in a business park, if it goes down a drain, it gets sent to one of several water reclamation facilities where it gets treated,” Davis said.

It eventually makes its way back into Lake Mead. But outdoor water is a different story.

Water schedules save billions of gallons of water, much more than individuals inside their homes making thoughtful, but small, changes.

Spectacles like the Bellagio Fountains use private groundwater rights dating to the 1950s, so limiting water use in that way wouldn’t help either.

What’s working in the west for now is sending out water cops and ditching grass.

Ashley Soriano joined Fox News in 2021 as a multimedia reporter based in Las Vegas.