A Japanese government program is allegedly encouraging foreign workers to abort their babies, and professionally punishing many who don’t.

Japan’s Technical Intern Training Program is a government initiative meant to bring migrant workers into the country and bolster the nation’s aging workforce. The program gives work and residency to foreign participants in exchange for a cheap and reliable boost to the working population. Activists claim that the program is abusive, however, and have reported abuses ranging from discrimination to termination due to pregnancy.

“Most technical interns are of reproductive age […] but the idea of them getting pregnant during their stay in Japan is often considered out of the question,” Masako Tanaka told the Japan Times. Tanaka is a professor studying reproductive rights at Sophia University – the country’s premier Catholic college.

Abortion is a complicated issue in Japan even in normal circumstances. Elective abortions are mostly illegal on paper, but in practice there is not much barrier to the procedure. The 1948 Eugenic Protection Law originally outlined basic requirements for the procedure – abortions could only be performed on non-viable babies and only when the woman’s health was at risk. The standards for these exemptions have fallen greatly, now including economic hardship as a qualifier and no longer requiring most forms of documentation.

Abortion has become more commonplace in Japan over the years, but cultural attitudes remain mixed.

Due to the country’s strict and demanding immigration requirements, the vast majority of non-Japanese are legal residents without citizenship. Racial and ethnic minorities can face difficulties assimilating into Japan, causing conflict with the country’s standards and expectations. Non-citizens also have limited legal recourse in the country, both on paper and in practice.

An entire industry has formed around hiring cheap labor from abroad and putting them to work in poor conditions in Japan. These sorts of private labor providers turn through workers rapidly.

Many participants in the Technical Intern Training Program – a government endeavor – are from poorer Asian countries, including Vietnam and the Philippines. Japan also pulls candidates from Pakistan, India, Thailand, Indonesia and more. In 2019, the program boasted 308,489 participants scattered across the country working low-pay jobs for a maximum of five years.

China is subjecting hundreds of thousands of women to forced birth control methods – or even mandatory abortions – as part of the government’s campaign to slash birth rates among the predominantly Muslim Uyghurs and other minority groups, according to intelligence first reported in 2020. 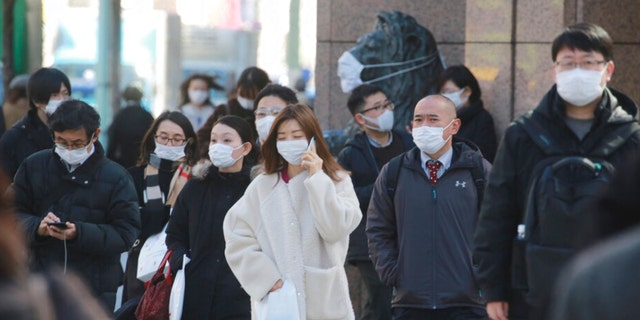 People wearing face masks to protect against the spread of the coronavirus walk on the street in Tokyo on Feb. 24, 2022. (AP Photo/Koji Sasahara)

Uyghurs are being subjected to brutal and coercive family planning policies – including forced sterilizations and abortions and the implantation of intra-uterine devices – indicating the Chinese Communist Party’s intent of significantly reducing, if not eliminating, the Uyghur population.

While individual women have spoken out before about forced birth control, the practice is far more widespread and systematic than previously known, according to a recent Associated Press investigation based on government statistics, state documents and interviews with 30 ex-detainees, family members and a former detention camp instructor.

“Uyghur mothers (are) subjected to forced late-term abortions – and even infanticide – for failure to comply with the CCP’s arbitrary birth-spacing requirements,” a Heritage Foundation report stated. “According to Chinese government documents, the CCP has the intent of subjecting at least 80% of Uyghur women of child-bearing age in four southern rural prefectures in Xinjiang to either forced sterilizations or mandatory IUD placement.”