In a case of art imitating life, a Houston Youtuber who rapped about robbing ATM machines was arrested this week in connection to robbing an ATM technician in Tennessee, according to reports.

Ladesion Riley, 30, who goes by “Jug God,” recently shared a video on YouTube called “Make it Home” in which he raps about robbing money machines outside of Texas. He sang about having thousands of dollars in a vehicle and praying to come home, Fox Houston reported.

Ladesion Riley, who rapped about robbing ATM machines, Darius Dugas, Christopher Alton and Sashondre Dugas were all arrested this week in connection with robbing an ATM technician in Tennessee.
(Metro Nashville Police Department)

He was arrested this week after an alleged heist, along with Darius Dugas, 27, Sashondre Dugas, 32, and Christopher Alton, 27, after checking out of a motel in Dickson, Tennessee, according to Metropolitan Nashville Police Department. All four suspects are from Houston.

Two of the suspects approached an ATM technician servicing a Bank of America machine on Monday from behind and told him “not do anything stupid and hand over the money,” police said. One of the getaway vehicles was a Hyundai Elantra that had been rented from Hertz, police said.

Detectives eventually discovered the car and a Jeep parked at a Motel 6 later that day. They watched as the cash was loaded into the Jeep, authorities said. Authorities found bundles of cash, but have not disclosed how much. 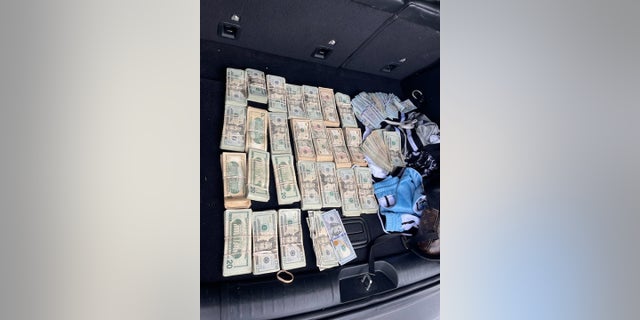 Two of the suspects were out of jail on felony bonds and have been arrested several times. Riley has a pending evading arrest in a motor vehicle charge, the Houston Police Officers’ Union said.

Dugas is a habitual offender who is out on a pending charge of felon in possession of a firearm, the union said.