A fundraiser to help an Iowa teen pay $150,000 in restitution to the family of an alleged rapist she killed has collected more than double its goal.

The GoFundMe account for 17-year-old Pieper Lewis has raised more than $378,833 from over 10,000 donors as of Thursday afternoon – after the court-ordered payment sparked national outrage.

The page was launched by her former math teacher Leland Schipper, who said the excess funds will go toward helping Lewis pursue an education or start a business – and give her the ability to help other victims of sex crimes.

“Pieper’s path to true freedom will not be easy, and she is still a teenager that has experienced a lot of trauma, Schipper wrote on the page.

Lewis has said that she was a 15-year-old runaway when she was pimped out to multiple men – including 37-year-old Zachary Brooks.

After he repeatedly raped her, she said she flew into a blind rage and stabbed him 30 times in June 2020.

Prosecutors, who originally charged her with first-degree murder, argued that he was asleep at the time of the attack and posed no immediate threat to her.

She pleaded guilty last year to involuntary manslaughter and willful injury for killing the father of two. Prosecutors have not disputed that she was a victim of rape or sex trafficking.

Polk County District Judge David Porter handed a down a deferred 20-year prison sentence Tuesday that will be expunged if she completes five years of supervised probation. 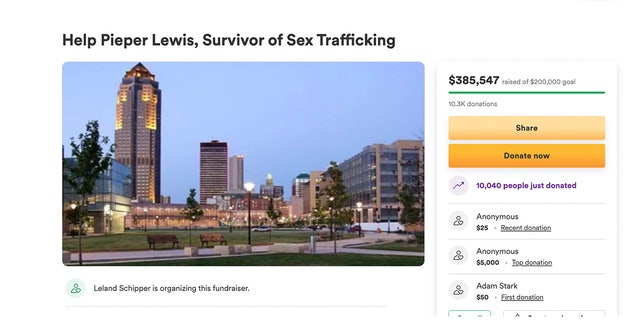 A GoFundMe page has raised nearly $400,000 to help Pieper Lewis, 17, pay restitution to the family of the alleged rapist she stabbed to death.
(GoFundMe)

Under Iowa law, anyone convicted of a felony that leads to the death of another person must pay at least this sum to the victim’s estate.

Lewis’ lawyers argued that she was a victim of sex trafficking, and it was cruel to force her to pay restitution to her alleged abuser’s family.

But Polk countered that the Iowa Supreme Court has upheld the state’s restitution law even in the face of similar arguments. 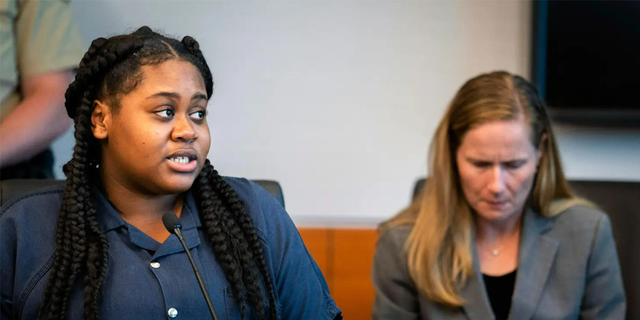 Prosecutors said that they sought charges against Lewis to ensure she gets the rehabilitative help she needs and to protect the public from a person capable of this degree of violence.

Lewis was 15 when she was first trafficked by a man, then 28, who called himself her boyfriend. He created a dating profile for her and forced her to have sex with other men for money, she said.

This man took her to Brooks’ apartment in May 2020 and ordered her to have sex with him. When she refused to return on another occasion, she said the man pulled out a knife and sliced her neck.

The man who pimped her out to Brooks has not been charged. “The matter is under investigation and our office will not comment further,” Polk County Attorney John Sarcone said.