Florida Gov. Ron DeSantis signed a bill Monday to create a police force dedicated to cracking down on voter fraud and other election crimes.

The new law, S.B. 524, creates an “Office of Election Crimes and Security” to investigate allegations of voter fraud. It increases the penalty for ballot harvesting from a first-degree misdemeanor to a third-degree felony, punishable by up to five years in prison. It also requires the Florida Department of State to strengthen ID requirements for mail-in ballots, requires voter rolls to be checked every year for ineligible voters and prevents election supervisors from receiving so-called “Zuckerbucks.”

The term “Zuckerbucks” refers to Facebook founder Mark Zuckerberg’s funding of election operations. During the 2020 election cycle, the Zuckerberg-Chan Initiative, founded by Zuckerberg and his wife, gave more than $350 million to local state jurisdictions to allegedly help counties run their elections safely during the COVID-19 pandemic.

‘THE VIEW’ RAILS AGAINST RON DESANTIS’ ACTIONS ON DISNEY: ‘A MESSAGE OF HATE’ 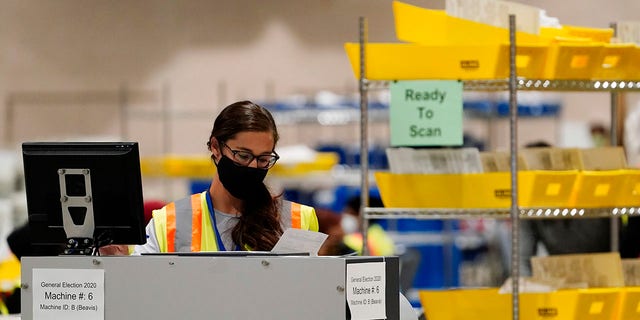 A Philadelphia election worker scans ballots for the 2020 general election in the United States at the Pennsylvania Convention Center, Tuesday, Nov. 3, 2020, in Philadelphia. (AP Photo/Matt Slocum)

However, a report from the Heritage Foundation’s Daily Signal found that in Pennsylvania, some counties had reportedly used funds for ‘get out the vote’ efforts and for costs unrelated to the fund’s ostensible goals. The Pennsylvania Department of State and 23 jurisdictions received $20 million from the Center for Tech and Civic Life — which distributed the funds from the Zuckerberg-Chan Initiative.

DeSantis took to Twitter to tout his signing of the bill writing, “The legislation I signed today will continue to make Florida a leader in election integrity by increasing penalties for ballot harvesting, expanding our ban on Zuckerbucks, and establishing an election integrity unit in state government to enforce our laws.”

Democrats, the minority party in the state Legislature, have criticized the bill as a way for DeSantis to appeal to Republican voters who believe the 2020 election results were fraudulent while he flirts with a presidential run of his own.

The Associated Press and Fox News’ Charles Creitz contributed to this report.