The 80-year-old California liquor store owner caught on video opening fire at a would-be robber with a shotgun is now speaking out, saying “I did a lot of hunting when I was a little kid.”

The incident early Sunday at Norco Market & Liquor in Norco, just east of Los Angeles, prompted the armed suspect to run out of his business screaming “he shot my arm off!”

“I would always protect my employees, my customers, myself. This instance, fortunately, I was here by myself, so I only had to worry about that. I took care of it and that was that,” the store’s owner, identified by CBS LA as Craig Cope, told the station.

“I did a lot of hunting when I was a little kid,” he added. “I’d put food on the table. So, I still remember things from a long time ago.”

ELDERLY CALIFORNIA STORE OWNER FIRES AT ARMED ROBBERY SUSPECT WHO SHOUTS, ‘HE SHOT MY ARM OFF!’

Two of the armed suspects police say they have taken into custody following the attempted robbery at a liquor store in Norco, Calif., on Sunday, July 31.
(Riverside County Sheriff’s Office)

Cope also told CBS LA that he thinks “more people should vote and vote the right way, and I think the politicians… this isn’t going to get me on the right side of a lot of people, but there’s a whole lotta people out there, they got no clue what it’s like to try to run a small business.

EMERGING CRIME CAPITALS OF AMERICA: THESE CITIES HAVE THE HIGHEST MURDERS PER CAPITA

“And when they’re letting people out… and we’ve got bad people, let’s face it. There’s bad people, bad people we don’t need. We need to get them locked up because this is a scary situation when that happens,” he also said. “Everybody works hard. They got bills to pay. These guys are going to come in and take it away from you. Not here.” 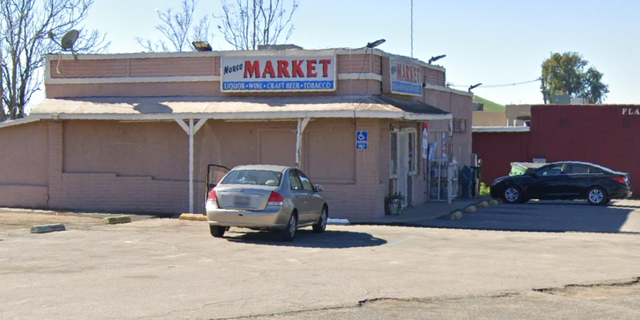 The 23-year-old gunman seen in surveillance footage wielding a rifle – who has not been publicly identified – was later tracked down at a local hospital “suffering from a gunshot wound consistent with a shotgun blast,” according to the Riverside County Sheriff’s Office.

He remains in critical but stable condition and will be booked into jail upon his release.

Three other men police say were inside a getaway vehicle at the time of the attempted robbery are in custody and are facing charges of robbery and conspiracy.

Cope, meanwhile, returned to work Tuesday after suffering a heart attack following the shooting, according to media reports.