Conservatives took to Twitter to blast the residents of Martha’s Vineyard for promptly removing the 50 illegal immigrants that Republican Florida Gov. Ron DeSantis sent to the island last week.

As Fox News Digital exclusively reported last Wednesday, DeSantis sent two planes carrying 50 illegal immigrants to the ritzy elite summer vacation spot in an attempt to highlight the record influx of illegal immigrants at the southern border, which has overwhelmed many border towns and exhausted their resources.

Martha’s Vineyard activated the National Guard in response, and released a statement calling the situation a “humanitarian crisis.” The 50 migrants were ultimately loaded onto buses two days after arriving and transported off Martha’s Vineyard to military housing on the Cape Cod mainland.

TUCKER CARLSON: WHY NO ONE IN MARTHA’S VINEYARD – INCLUDING THE OBAMAS – CELEBRATED THE MIGRANTS

“Just 50 illegal immigrants entered Martha’s Vineyard, and within 48 hours the wealthy liberal residents rounded them up and shipped them off to a military base,” conservative commentator Michael Knowles tweeted.

“Any residents of Martha’s Vineyard who have a ‘Coexist’ bumper sticker on their car are hereby required to remove it,” said Rep. Lauren Boebert, R-Colo.

A Venezuelan migrant is led onto a bus at St. Andrew’s Episcopal Church on Friday, Sept. 16, 2022, in Edgartown, Massachusetts, on the island of Martha’s Vineyard.
(Matias J. Ocner/Miami Herald/Tribune News Service via Getty Images)

“The Martha’s Vineyard thing might be the best and clearest example of what so many of us have been talking about for years,” tweeted comedian Dave Smith. “The progressive elites advocate for policies that they never have to suffer the consequences of. And the one time they do, it ends quickly.”

“They are against building a wall but they live in gated communities. They are for gun control but they have armed security. They destroy public education but send their kids to elite private schools. They support mask mandates but only their servants wear them at their parties,” Smith continued.

MARTHA’S VINEYARD MERCHANT SAYS THERE’S A ‘PROCESS’ FOR COMING TO AMERICA, ‘FOLLOW THAT’

“There are too many examples like this to list them off. And it’s not just that they advocate for these policies but that they demonize, in the most vicious ways, anyone who dare oppose them. This is why the elites are so rightfully hated in our society,” the comedian concluded.

“The reaction to DeSantis’ Martha’s Vineyard move should disabuse people of the idea that libs are capable of feeling hypocrisy. They don’t care. They can’t learn. You simply have to destroy their world with political power instead of trying to teach them a lesson,” wrote Chronicles magazine senior writer Pedro L. Gonzalez. 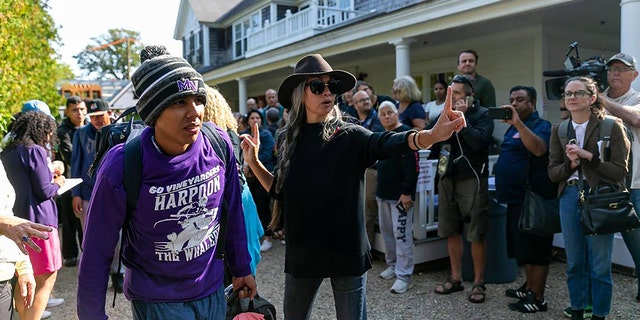 A Venezuelan migrant is led onto a bus at St. Andrew’s Episcopal Church on Friday, Sept. 16, 2022, in Edgartown, Massachusetts, on the island of Martha’s Vineyard.
(Matias J. Ocner/Miami Herald/Tribune News Service via Getty Images)

“Martha’s Vineyard set a beautiful example for the nation. They used the military to deport every last illegal migrant from their island in less than 48 hours. The entire nation should emulate Martha’s Vineyard,” wrote Breitbart News reporter Alana Mastrangelo.

“I just want to say thank you to the progressive left for these last few days of entertainment. The hypocrisy of you defending elitist, rich, white people in Martha’s Vineyard has been nothing short of pure hilarity,” tweeted BlazeTV host Chad Prather.

“Governors should have the same right as Martha’s Vineyard. They should be able to deport illegal migrants out of their states and out of the country. Joe Biden, Kamala Harris, and [Mayorkas] are enabling a massive daily invasion endangering all Americans,” wrote Rep. Marjorie Taylor Greene, R-Ga., adding, “Impeach!” 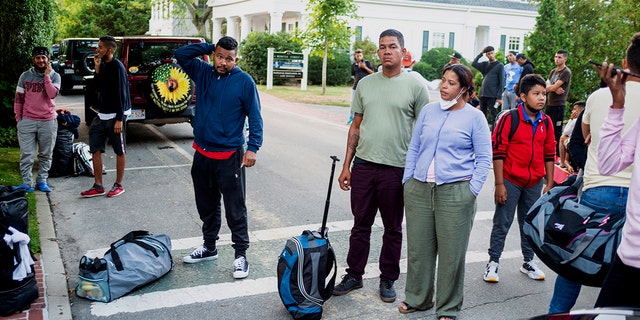 In response to a tweet calling DeSantis’ move a “political stunt,” former Congresswoman Nan Hayworth tweeted, “It only became a ‘stunt’ when the limousine-Lefty a–holes of Martha’s Vineyard decided to call in the military instead of taking responsibility for the results of the policies they support.”

Joel Berry, managing editor of The Babylon Bee, tweeted out an article from his publication with the headline: “Martha’s Vineyard Takes Revenge On DeSantis By Shipping Him 50 Karens.”

The 50 migrants DeSantis sent to Martha’s Vineyard represent less than one-tenth of 1% of the nearly 5 million illegal immigrants believed to have crossed the southern border since President Biden took office in January 2021.

There have so far been more than 2 million migrant encounters this fiscal year alone, on top of more than 1.7 million encounters in fiscal 2021.