A video has emerged Monday of people running and screaming in terror while fleeing a mass shooting that unfolded in in Cincinnati over the weekend.

The 15-second clip, which was captured by a resident’s doorbell camera, begins with a man appearing to hide at the entrance of the property.

He then takes off, joining a crowd of people running away from the violence erupting outside a bar in the Over-the-Rhine neighborhood at around 1:45 a.m on Sunday.

Around a dozen gunshots can be heard in total.

A woman is seen stumbling to the ground while trying to flee a mass shooting in Cincinnati, Ohio, early Sunday.
(Twitter/@MattEuson)

Lt. Colonel Mike John confirmed there had been an active shooter in the area and that multiple shots were fired, FOX 19 reported. At least nine people were injured in the shooting, but none of them are in critical condition.

An officer fired one shot at the suspect as they fled the scene, although it remains unclear whether the gunman was wounded. 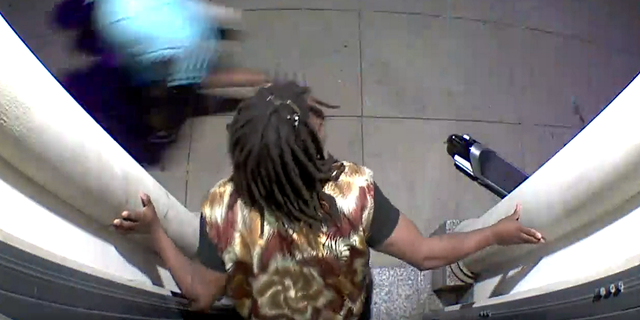 A man appears to hide in the entranceway to a home while fleeing a mass shooting in Cincinnati, Ohio, on Sunday.
(Twitter/@MattEuson)

There were no suspects in custody as of 5 a.m. ET Sunday. Police said they believe there was only one shooter but that they cannot confirm that.

“Seen people running and it was just [a] melee,” a witness told FOX 19. “Chaos. I actually saw the cops running down the street trying to find the guy who they were looking for.”