The housing market in China has recorded a sharp drop-off in home sales throughout July as underlying economic troubles make themselves more apparent.

Apartment sales had increased in May and June over the previous months, but July largely blunted those gains, according to The Wall Street Journal.

“China’s economy has been slowing for quite some time,” Craig Singleton, a fellow at the nonpartisan Foundation for Defense of Democracies, previously told Fox News Digital. “What we’re witnessing now is a rapid economic slowdown.”

GEN. KELLOGG: IT’S TIME TO PUSH BACK ON CHINA

Singleton argues that while COVID-19 has played a part in the initial troubles, China’s recovery slowdown has resulted from “deeper structural, systemic problems.”

Aerial photo taken on Feb. 16, 2022 shows the construction site of the new campus of New York University NYU Shanghai, in east China’s Shanghai. The construction occurred in the heart of a sprawling cityscape.
(Fang Zhe/Xinhua via Getty Images)

“One of them happens to be … China’s hyper leveraged property market by some conservative estimates,” he explained. “China’s property sector makes up 30% of Chinese GDP, so even small deviations in that market can have outsized impact on China’s broader global domestic product and its broader growth.”

The Chinese real estate market saw a sales boom driven by debt-funded building projects that sold homes before they were built. The lack of completed projects led to protests from angry would-be homebuyers who refused to pay their mortgages. 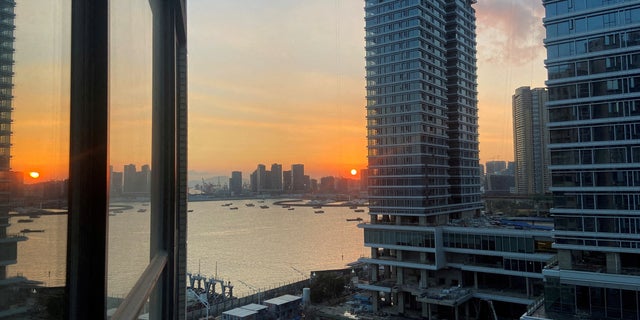 FILE PHOTO: Under-construction apartments are pictured from a building during sunset in the Shekou area of Shenzhen, Guangdong province, China November 7, 2021.
(Reuters/David Kirton)

Hundreds of buyers from roughly 320 projects across the country as of July 29 have refused to pay their mortgages. Those prospective buyers have turned instead to buy second-hand homes or newly-built state-owned homes, which can come at a cheaper cost.