California police have released video footage of a person of interest tied to six murders and one attempted murder since April 2021.

Police have since announced, however, that the suspect is linked to additional incidents that occurred in April 2021, including the shooting of an unnamed 46-year-old Black woman in Stockton April 16 and the fatal shooting of an unnamed 40-year-old Hispanic man in Oakland April 10. Both shootings occurred in the early morning at 3:20 a.m. and 4:18 a.m., respectively.

Police in Stockton, Calif. release a surveillance photo of the person of interest in five recent homicides.
(Stockton Police Department/Facebook)

A $100,000 reward is being offered for information leading to an arrest in the case, according to police.

The woman who survived the perpetrator’s shooting attempt in April 2021 had been in a tent when the attack occurred, Stockton police announced during a Tuesday evening press conference, CBS Sacramento reporter Madisen Keavy reported.

Silva told Fox News Digital Monday that investigators have tracked the person of interest “near some of the crime scenes.” He would not divulge more about the sightings. But he said investigators have not “caught anyone on video surveillance holding a gun or even committing a crime.” Stockton Police Chief Stanley McFadden notified the public of a startling pattern Friday, shortly after being briefed by his detectives of the circumstances and similarities between each case, according to Silva. In an announcement posted to Facebook, McFadden urged the public to remain vigilant as the manhunt continues. 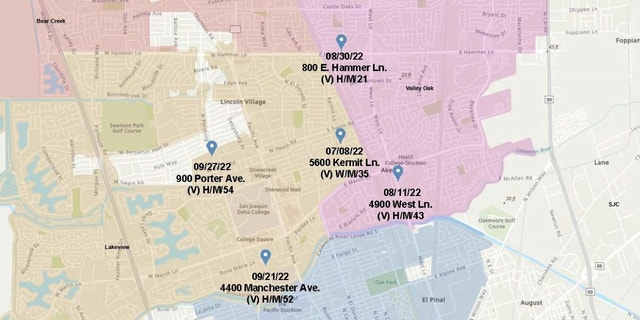 “Please avoid isolated areas and travel in well-lit areas. Remember, there is safety in numbers. So if you can, travel with a friend,” McFadden stressed. “If you see suspicious activity, call 209-937-8377 or 911 if it’s an emergency.”

Stockton police are asking anyone with information to call (209) 937-8167 or email policetips@stocktonca.gov. Tipsters can also submit information anonymously to Stockton Crime Stoppers via its website or by calling (209) 946-0600.