The U.N. has apologized after employees took photos under Taliban flags during a visit to Afghanistan.

“We are aware of this photo which was taken while the Deputy Secretary-General was meeting the de facto leaders in Afghanistan,” Stéphane Dujarric, spokesperson for the U.N. secretary-general, told Fox News Digital. “Her security had taken her to that meeting and were waiting next door.”

“The photo should never have been taken,” Dujarric stressed. “It was a mistake, and we apologize for it.”

Deputy Secretary-General Amina Mohammad, the U.N.’s most senior female official, had visited Afghanistan in an effort to address concerns over women’s rights in the country – particularly access to higher education and limits on women in the workplace.

The delegation is the most senior group of officials to visit the country since the Taliban took power in 2021.

Mohammad looked to speak with senior Taliban leaders to convince them to reverse direction on the restrictions, which have imperiled humanitarian operations since women cannot participate, according to the BBC.

PENTAGON DODGES QUESTIONS ON DETENTION OF AFGHAN ALLY WHO ILLEGALLY CROSSED BORDER: ‘THIS IS AN EMBARRASSMENT’

Ali Maisam Nazary, head of foreign relations for the National Resistance Front of Afghanistan, posted the photos and denounced them as “insensitive.”

“The U.N. personnel in Kabul taking a photo with a terrorist group’s flag brings the United Nation’s impartiality & integrity into question,” Nazary wrote. “We kindly ask Antonio Guterres to investigate this matter & for UNAMA News to prevent such insensitive actions that can tarnish its reputation.”

Nazary separately told Fox News Digital that the photos were “unfortunate” and reiterated concerns over U.N. impartiality and integrity.

“This comes as the Taliban terrorists are allowing Afghanistan to become a hub for international terrorism, and they are increasing their oppression on citizens, especially women,” Nazary said. “Such acts cause us to question the U.N.’s impartiality and integrity in Afghanistan, and we kindly ask Secretary-General Guterres to investigate this matter and prevent any biased move on the part of U.N. personnel visiting Afghanistan in the future.”

Suhail Shaheen, the Taliban’s chosen representative to the U.N. and former spokesman for the Taliban, told Fox News Digital that the words on the Taliban flag belong to “Muslims all over the world.” 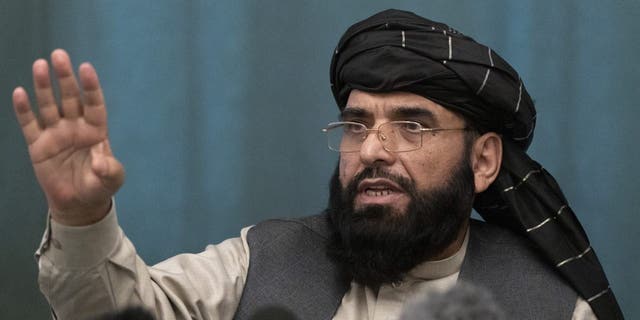 “The words written on the white cloth are words that Muslims all over the world believe in, i.e. there is no God but Allah, Mohammad (pbuh) is the prophet of Allah,” Shaheen said. “It belongs to all Muslims, not one nation or government.”

“Anyone who doesn’t believe this are not called Muslims, or say something against it, commits blasphemy,” he added.

The U.N. delegation met with acting Foreign Minister Amir Khan Muttaqi, who stressed the need for international recognition to help empower the government, along with the removal of sanctions that limit the government’s funding.