First responders in Taiwan are searching through rubble for survivors after a 6.9 magnitude earthquake struck the island Sunday, triggering fears of a tsunami in Japan.

Taiwan’s earthquake monitoring agency says the quake hit off the island’s southeastern coast at a depth of roughly four miles. The agency has reported dozens of aftershocks in the hours since the opening quake.

The U.S. Geological Survey says the threat of a tsunami striking Japan has passed, according to NBC News.

Images from Taiwan’s eastern Hualien County show at least one collapsed building, with firefighters and other first responders attempting to save those trapped inside.

CHINA ACCUSES US, TAIWAN OFFICIALS OF ‘PLAYING WITH FIRE’ WITH UKRAINE COMPARISONS 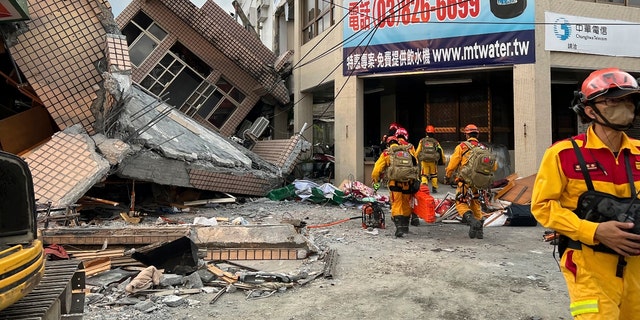 CHINA HAS REPEATEDLY SIMULATED ATTACKS ON US WARSHIPS, TAIWAN WARNS

Taiwan has no official reports on injuries or fatalities resulting from the quake, but reports say at least one person has been killed and 79 were injured.

The casualties centered around the collapsed convenience store building and the Gaoliao Bridge in Hualien County, as well as a derailed train car. Authorities rescued three people who fell from the bridge as it split apart in the quake, according to the South China Morning Post.

Firefighters say they saved a 39-year-old woman and her five-year-old daughter from the collapsed convenience store as well.

The disaster comes weeks after Taiwan offered to send its first responders to assist Chinese firefighters attempting to save those trapped in the aftermath of a 6.8 magnitude earthquake in early September.

The Chinese government did not respond to the offer, however, and Beijing has yet to comment on Sunday’s earthquake.