A top advisor to Ukrainian President Volodymyr Zelenskyy and the chief negotiator on peace talks with Russia, Mykhailo Podolyak, said Thursday there are four “components” Kyiv needs before negotiations with Moscow can continue – all of which are advanced military equipment.

“To talk with [the Russian Federation], you need to have the right negotiating position. It has 4 simple components,” he said on Twitter.

Western nations like the U.S. have already pledged to send at least 20 HIMARS to Kyiv, but Washington has stopped short of sending ATACMS, citing concerns over sparking a third World War.

Ukrainian Defense Minister Oleksii Reznikov has said last month that his forces need at least 50 systems like the HIMARS to “hold back” Russian forces and at least 100 systems “for an effective counter-offensive.”

Senior Ukrainian defense officials have told Fox New Digital that ATACMS systems are needed, not to strike Russia beyond Ukraine’s borders, but to more effectively cope with the mammoth 1,500-mile-long frontline its soldiers are contending with. 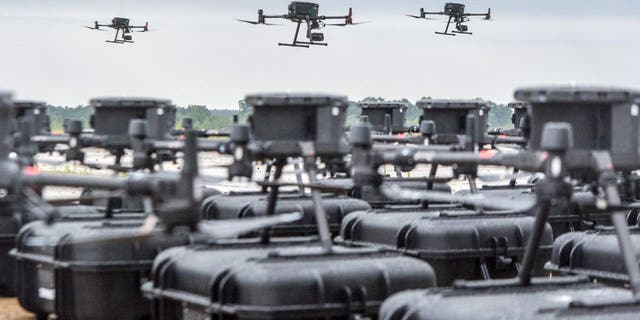 The presentation of 30 DJI Matrice 300 RTK drones purchased for the Armed Forces of Ukraine under the Army of Drones Project is underway in Ukraine.
(Evgen Kotenko/ Ukrinform/Future Publishing via Getty Images)

US SENDING $550 MILLION IN MILITARY AID TO UKRAINE, INCLUDING HIMARS AMMUNITION

The U.S. and Western allies have sent Kyiv drones and armored vehicles since the war began in February, though Ukrainian officials continue to warn it does not have enough.

The push for modern air defenses to help defend Ukrainian skies remains an ongoing battle as NATO nations have yet to send Ukraine any warplanes.

“The good news is that the Kremlin wants a negotiated solution,” Schroeder told German media. “A first success is the grain deal, perhaps that can be slowly expanded to a ceasefire.”

Peace talks between Kyiv and Moscow ground to a halt in May after Ukrainian officials accused Russia of not engaging in good faith as it continued its deadly assault in Ukraine.

“If Moscow wants dialogue, it is up to them,” Podolyak said Wednesday. “First, a cease-fire and troops withdrawal, then – constructive [talks.]”