Harris’ announcement will come as part of a White House package seeking to shore up states readiness for extreme weather that the Biden administration attributes to climate change.

“The Biden-Harris Administration is taking a wide range of actions to respond to intensifying heat waves and reduce associated health risks, especially for vulnerable groups and underserved communities,” The White House wrote in a statement.

“We know that the impacts of the climate crisis are here, and that we must invest in building resilience to protect our communities, infrastructure and economy,″ the White House said.

WHAT DOES FLOOD INSURANCE COVER?

US Vice President Kamala Harris speaks at the National Education Association 2022 annual meeting and representative assembly in Chicago, Illinois, US, on Tuesday, July 5, 2022. Harris highlighted educators role in communities across the country and the administration’s investments to support students and educators, according to the White House. Photographer: Tannen Maury/EPA/Bloomberg via Getty Images
(Tannen Maury/EPA/Bloomberg via Getty Images) 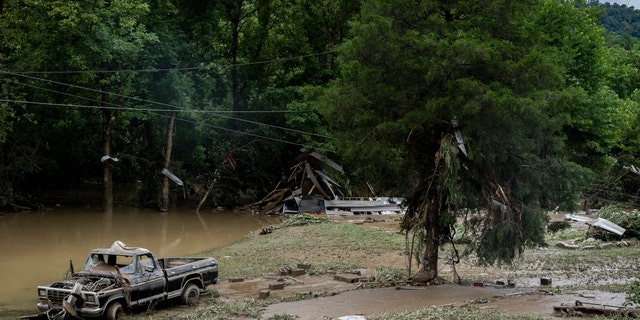 HAZARD, KY – JULY 29: A damaged vehicle and debris are seen along the Bert T Combs Mountain Highway on July 29, 2022 near Hazard, Kentucky. At least 16 people have been killed and hundreds had to be rescued amid flooding from heavy rainfall.
((Photo by Michael Swensen/Getty Images))

Harris will make the announcement during an appearance alongside the head of the Federal Emergency Management Agency (FEMA), Deanne Criswell, in Florida.

The vice president is expected to address both ongoing flooding in Kentucky and the widespread wildfires in California during her Monday speech.