U.N. Secretary-General Antonio Guterres said Tuesday that despite two months of international sanctions and condemnation for its invasion of Ukraine, Russia still has a “different position” on what is happening in the war-torn country.

Guterres made the remark in Moscow after meeting with Russian Foreign Minister Sergey Lavrov. He is expected to meet with Russian President Vladimir Putin later today before going to Ukraine on Thursday to talk with its leader, Volodymyr Zelenskyy.

“I had a very frank discussion with the Foreign Minister Sergey Lavrov and it is clear there are two different positions on what is happening in Ukraine,” Guterres said in front of Lavrov and reporters in Moscow.

“According to the Russian Federation what is taking place is a special military operation with the objectives that were announced,” he continued. “According to the U.N. in line with resolutions passed by the general assembly, Russia’s invasion of Ukraine is a violation of its territorial integrity and against the charter of the United Nations.”

Guterres said “today, across the Donbas [in Ukraine], a violent battle is underway with tremendous deaths and destruction.

“Many civilians are being killed and hundreds of thousands of people are in life-threatening conditions, trapped by the conflict,” he added. 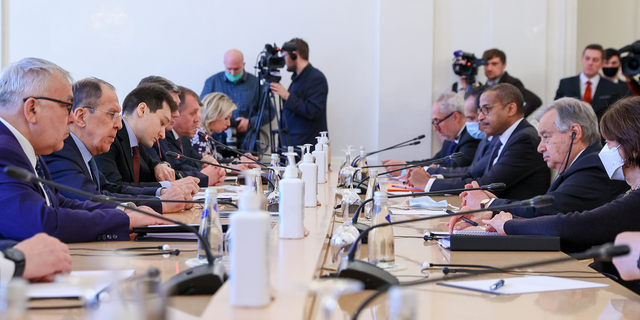 Guterres also proposed Tuesday the formation of a “humanitarian contact group” that would facilitate safe evacuations of Ukrainians trapped in cities like Mariupol, where officials have said up to 1,000 civilians are hiding inside the Azovstal steel factory.

“My proposal is for the coordinated work of the United Nations, the International Committee of the Red Cross and Ukraine and Russian Federation forces to enable the safe evacuation of those civilians who want to leave both inside the Azovstal plant and in the city in any direction they choose and to deliver humanitarian aid required,” he said.

Ukraine wants the U.N. “to be the initiator and guarantor of the humanitarian corridor from Azovstal for civilians,” Reuters quoted Deputy Prime Minister Iryna Vereshchuk as saying Monday.