Ukraine diverted the flow of Russian natural gas on Wednesday through one hub that feeds European homes and industry.

The nation’s natural gas pipeline operator said it would stop shipments through the hub in a part of eastern Ukraine controlled by Moscow-backed separatists because of interference from enemy forces, including the apparent siphoning off of gas.

Preliminary flow data suggested that much of the gas was already being directed through another pipeline, although Russia’s state-owned giant Gazprom indicated the amount of gas flowing to Europe through Ukraine declined by 25%.

It was not clear if Russia would take any immediate hit, as the nation has other ways of transporting gas.

Orthodox Sister Evdokia gestures in front of the crater of an explosion, after Russian shelling next to the Orthodox Skete in honour of St. John of Shanghai in Adamivka, near Slovyansk, Donetsk region, Ukraine, Tuesday, May 10, 2022.
(AP Photo/Andriy Andriyenko)

The cutoff comes a day after the U.S. House of Representatives approved a $40 billion Ukraine aid package.

In Ukraine, Russian forces targeted an area around the southeastern city of Zaporizhzhia.

They continued to attack the steel plant in Mariupol, where some civilians may still be trapped, according to Ukrainian officials.

While President Volodymyr Zelenskyy suggested Ukraine’s military is gradually pushing troops away from Kharkiv, the talk of annexation in Kherson raised the possibility that the Kremlin will seek to break off another piece of Ukraine. 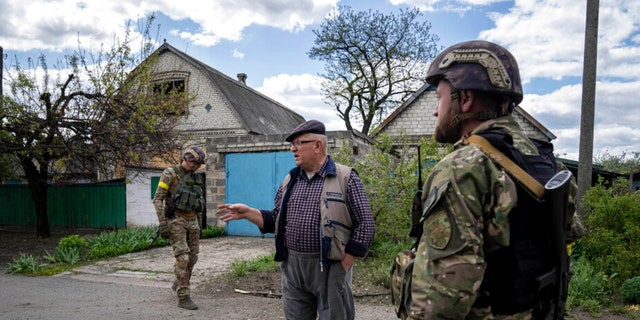 A Ukrainian serviceman talks with a local resident after de-mining the residential area after shelling of Russian forces in Maksymilyanivka, Ukraine, Tuesday, May 10, 2022.
(AP Photo/Evgeniy Maloletka)

President Biden said Monday that he is worried that Russian President Vladimir Putin doesn’t have an exit strategy for the war in Ukraine, which has lasted for nearly 80 days.

According to the Office of the U.N. High Commissioner for Human Rights (OHCHR), 7,256 civilians have been killed or injured in the conflict.

The office believes that the actual figures are considerably higher.