Shanghai is tightening its already strict COVID-19 lockdown in a fresh push to eliminate infections outside quarantined areas of China’s biggest city by late this month, people familiar with the matter said.

Curbs will likely vary across the city’s 16 districts as some have already hit the target, but the people said movement curbs will generally remain until the end of May due to fears of a rebound, despite recently falling case numbers during the country’s worst coronavirus outbreak.

Accounts from residents in several districts as well as social media posts showed the government of the city of 25 million accelerating and expanding an effort to transfer the close contacts of positive cases to central quarantine centers.

Multiple residents said they were being required to move to such facilities, despite testing negative, after cases were found in their buildings, stoking frustrations.

Other residents said they were told on Saturday by their housing compounds they would no longer be able to leave their front doors or estates or receive deliveries for a week as part of efforts to reach the goal of “zero cases at community level” goal.

A worker in a protective suit helps a man in a wheelchair during lockdown amid the COVID-19 pandemic in Shanghai, China, May 5, 2022.
(REUTERS/Aly Song/File Photo)

The Shanghai government did not immediately respond to a request for comment.

Shanghai is reporting thousands of cases a day, the vast majority in sealed-off areas such as central quarantine facilities, premises under “closed loop” management and housing where residents are barred from leaving their front doors.

Ending community-level transmission outside such areas has been a lockdown turning point in cities such as Shenzhen, which last month reopened public transportation and let people go back to work.

But Shanghai has struggled to end community transmission in the face of the infectious Omicron variant. Authorities initially aimed to reach the goal by April 20, Reuters reported last month, but only managed to do so in two districts.

On Saturday, authorities in Putuo and Changning districts issued notices saying residents of housing compounds classified as the city’s lowest-risk “prevention” areas could no longer leave their compounds.

One resident in the Pudong New Area district, which houses Shanghai’s financial center, told Reuters he had received a similar notice from his compound. 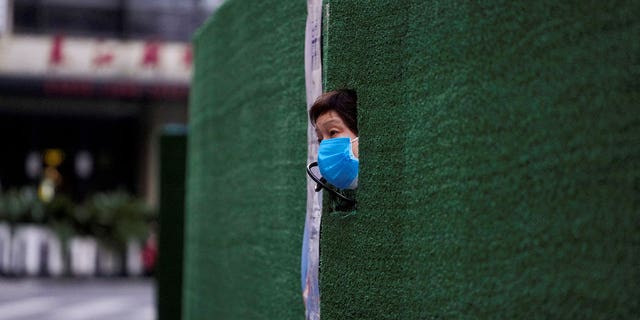 A resident looks out through a gap in the barrier at a residential area during lockdown amid the COVID-19 pandemic in Shanghai, China, May 6, 2022.
(REUTERS/Aly Song/File Photo)

In Xuhui district, which includes the former French Concession area, residents from nine housing compounds told Reuters they were notified by their neighborhood committees Saturday that they would be barred from leaving their front doors or receiving deliveries for at least a week.

“This is to reach ‘zero cases at community level’ as soon as possible and allow the lockdown to be lifted,” said a notice in Xuhui seen by Reuters. It said the curbs would be in place until May 15.

One neighborhood committee said on its official WeChat account that for the safety of the community it had to move all the occupants of one building and disinfect the area after a resident tested positive.

A video shared thousands of times on social media showed hazmat-suited police arguing with residents who had been told they had to move to quarantine after a neighbor tested positive. 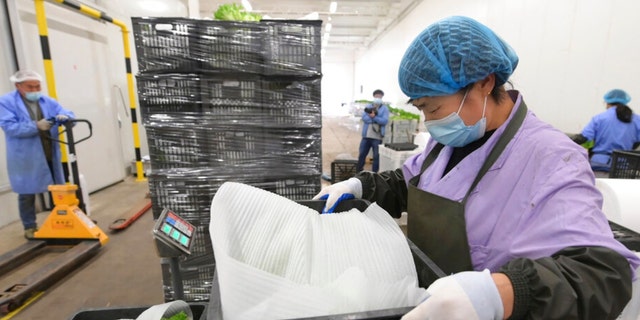 In this photo released by China’s Xinhua News Agency, workers pack boxes of vegetables to be sent to urban neighborhoods at an agricultural facility in Shanghai April 19, 2022.
(Li He/Xinhua via AP)

“This is so that we can thoroughly remove any positive cases,” one officer says. “Stop asking me why, there is no why. We have to adhere to national guidelines and the epidemic control policy.”

Reuters could not independently verify the video.

Shanghai has achieved citywide “zero-COVID” outside quarantine areas only twice, on April 30 and May 1. Daily cases have since been in the double digits. City officials have said districts with no cases outside quarantine for three consecutive days were considered to have achieved the goal.

Officials have provided little clarity on how they eventually will lift the lockdown, warning the public against complacency.