CHERNIHIV, Ukraine – Donets Ludmyla was very deliberate when she spotted our news team in Chernihiv. Not many crews had made it to this battered city since the invasion. She wanted to talk about the bloodshed, the injustice.

“What do they want from us?” she asked rhetorically. “I still don’t understand.”

The sad truth is: The invading army didn’t want anything from the people of Chernihiv. They had the misfortune of being a population center between the Belarus border and Russia’s unstated but clear goal of decapitating the Ukrainian government in Kyiv. Rather than bypassing Chernihiv and risk being attacked from the rear, the invading force attempted to beat the town into submission.

Donets is 76 years old. When family members piled in a car to escape, the car filled up. She opted to let younger family members, with more life ahead of them, go and she stayed behind. Ten of the people who sheltered with her were killed. Disabled people lived in her house. Three of them have died since the invasion.

Like many Ukrainians in the north and east of the country, Donets is bewildered. She once thought of Russians as kin, fellow countrymen. “They called us brothers, but they are not brothers to us,” she said through sobs. “They are bastards.  After all, they are abusing us so much, what do they need? We did not claim their territory. It’s all a lie.”

As we shot scenes of destruction, cameraman Stephen Kanicka focused on a small house that had taken a direct hit. It was nothing but a pile of burned lumber and remains of a chimney. A framed picture of Jesus and several pairs of shoes had been fished from the debris and set up like a display.

Vasylchenko Valentyna approached us eager to talk. “Most of my family died here,” she said and broke into tears. Vasylchenko had pulled her family into that house for shelter. Her grandson, granddaughter, granddaughter’s groom and son-in-law were all killed. Only Vasylchenko and one daughter survived. Given the destruction, it’s hard to understand how anyone survived. The house was flattened.

“Such people have no right to exist,” she said of the Russian Army. “Such a nation must be destroyed because they came to kill innocent people, we are not military. We are civilians who lived here and did no harm to anyone.”

All she has left is what she can pull from the debris, one daughter and haunting memories. “I sleep badly. I dream of my dead relatives,” Vasylchenko said.

A short distance from Vasylchenko’s house is School Number 21. Inna Levchenko is the principal. She had established the school as a shelter. “Whole families hid here. Grandparents, little kids, and students of our school,” Inna said. She marked both the front and back with the Russian word for “kids,” to indicate children were inside.

Inna now walks with a limp as she’s recovering from a broken leg. She can see only out of her right eye. The scar from the shrapnel that went into her left eye is still red and appears tender. She has other shrapnel scars on her face and arms that are healing.

School Number 21 also took a direct hit. A shell of the school remains, but most of the building is destroyed. Classrooms, offices and the cafeteria now sit in open air with piles of bricks all around. “When the shock wave hit me, I covered my face with hands. There are still pieces of glass and metal in my body that have not yet been removed,” Inna said.

In the chaos following the blast, as she was receiving care, Inna lost track of how many people had been killed or injured. She is one of few people in Chernihiv who did not break into tears telling us her story. Inna is angry at the Russians with whom she once felt close. “These are not human beings. I do not understand what they were guided by, because you see that it is the private sector and schools are clearly visible,” she said.

FORCED INTO A BASEMENT IN UKRAINE, RESIDENTS BEGAN TO DIE

On the north side of town, about 3 acres of woodland has been cleared to make space for a thousand new graves. At least in Chernihiv, the freshly dead have the dignity of individual graves. Rows and rows of sandy soil have been turned up with mounds of dirt over the bodies. The wood on 988 Orthodox crosses is yet to weather. Garlands and flowers placed at the graves are fresh as relatives still make regular visits. A small section of about 42 graves is marked with Ukrainian flags and pictures of the soldiers that lie there. The other 946 new graves are all civilians.

Volodomyr Bruduk held a graveside vigil for his brother, Anatoli. They laid flowers and fruit on the sand and poured Anatoli’s favorite drink there. He said Anatoli was killed by a cluster bomb. “Why did they come to our peaceful country?” he asked, explaining that his soul has been longing for his brother. “Young boys, children and women died. There is nothing to think about. They (the Russians) must be destroyed.” 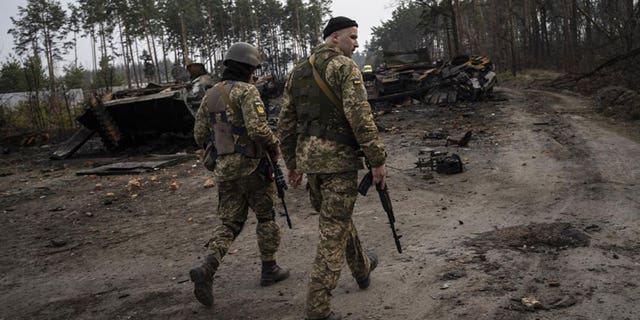 This is also the town where American Jimmy Hill from Minnesota was killed, when civilians waiting in a bread line were massacred on March 16. At the time, the U.S. Embassy reported Russian forces had shot and killed 10 civilians. That was bad information which made it easy for the Kremlin to state they didn’t have forces close enough to shoot anyone. What is clear from shrapnel scars all over the area where the people were killed is that a mortar or artillery round flew in and hit where the hungry people were hoping to get some food.

Oleksandr Guryanov was a witness. He disputed the official account of 10 dead and said that one strike killed 14 people. Divots and holes are all over the walls and the gate that Oleksandr passes through to get to work, a daily reminder of the bloodshed. “But what can you do about it?” he asked. “You won’t bring people back, but I need to work.”

Dozens of concrete apartment buildings are marked with black holes and shrapnel scars from artillery strikes. So many, that I told Stephen, the cameraman, he didn’t need to shoot each one. We’d never use all those shots. The Hotel Ukraine, bright pink with white trim and wrought-iron railings, has a giant crater in the center of it.

The houses struck tend to line up in a row, either hit by an aircraft dropping bombs or the systematic fire of the multiple launch rocket systems.

As I think about it, the only military targets we saw were some holes in the roads and bridges that had been blown up, but Ukrainians blew the bridges to prevent the invaders from having easy access to the center of town. Granted, Ukrainian fighters have moved around since the Russians retreated from Chernihiv. We saw little to no evidence of Russians shooting at military targets, only civilian.