The son of the disgraced late Philippines dictator Ferdinand Marcos vowed on Tuesday to work for all people after his stunning election victory, and told the world to judge him by his presidency, not his family’s past.

Ferdinand Marcos Jr, better known as “Bongbong”, become the first candidate in recent history to win an outright majority in a Philippines presidential election, paving the way for a once unimaginable return to rule for the country’s most notorious political dynasty.

“Judge me not by my ancestors, but by my actions,” Marcos told the world, according to a statement by his spokesperson Vic Rodriguez.

A demonstration outside the Commission of Elections office in Manila, Philippines, on May 10, 2022.
(Veejay Villafranca/Bloomberg via Getty Images)

Marcos fled into exile in Hawaii with his family during a 1986 “people power” uprising that ended his father’s autocratic 20-year rule, and has served in congress and the senate since his return to the Philippines in 1991.

Marcos’ runaway victory in Monday’s election now looks certain with 98% of the eligible ballots counted in an unofficial tally showing he has 31 million votes, double that of his nearest rival, Vice President Leni Robredo.

An official result is expected around the end of the month.

“This is a victory for all Filipinos, and for democracy,” spokesman Rodriguez said.

“To those who voted for Bongbong, and those who did not, it is his promise to be a president for all Filipinos. To seek common ground across political divides, and to work together to unite the nation.”

Though Marcos, 64, campaigned on a platform of unity, political analysts say his presidency is unlikely to foster that, with bitter feelings about his family’s vast political influence and wealth.

Philippine’s markets were mixed after the vote. Stocks (.PSI) lost as much as 3% at one point, sovereign dollar bonds fell, while the peso currency rose 0.4% against the dollar.

Marcos in his statement said he would begin delivering for the Filipino people and looked forward to working with international partners and organizations.

Many who did not support Marcos are angered by what they see as a brazen attempt by the once reviled former first family to use its mastery of social media to reinvent historical narratives of its time in power.

Thousands of opponents of the senior Marcos suffered persecution during a brutal 1972-1981 era of martial law, and the family name became synonymous with plunder, cronyism and extravagant living, with billions of dollars of state wealth disappearing. 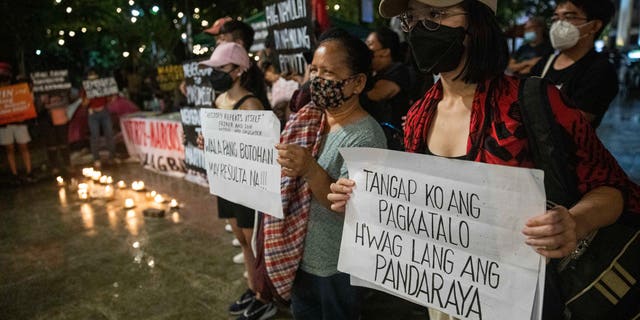 Anti Marcos and Duterte protesters hold a vigil in Liwasan Bonifacio Park on May 10, 2022 in Manila, Philippines.
(Lauren DeCicca/Getty Images)

The Marcos family has denied wrongdoing and many of its supporters, bloggers and social media influencers say historical accounts are distorted.

Around 400 people, mostly students, staged a protest against Marcos outside the election commission on Tuesday, citing election irregularities.

The poll body on Tuesday upheld its dismissals of complaints filed by different groups, including victims of martial law, that had sought to disbar Marcos from the presidential race based on a 1995 tax evasion conviction.

Two of the petitioners, including leftist group Akbayan, said they will appeal to the Supreme Court.

Manila city Mayor Francisco Domagoso, running a distant fourth, and retired boxing champion Manny Pacquiao, third place in the tally, conceded defeat on Tuesday. “I hope even though I lost this fight, my fellow Filipinos and the poor are winners,” Pacquiao said via Facebook.

A big win for Marcos was securing President Rodrigo Duterte’s daughter as his vice presidential running mate. Sara Duterte-Carpio won more than three times the number of votes compared with her nearest rival and also likely broadened the Marcos appeal in many areas.

Human rights group Karapatan called on Filipinos to reject the new Marcos presidency, which it said was built on lies and disinformation “to deodorize the Marcoses’ detestable image”. 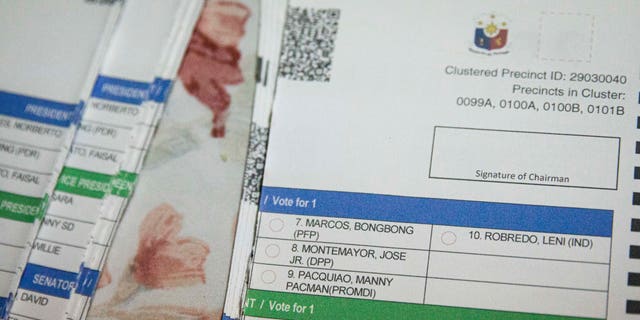 Meanwhile, Amnesty International accused Marcos and his running mate of avoiding discussing human rights violations, including those committed under martial law and during President Duterte’s bloody war on drugs.

Marcos, who shied away from debates and interviews in the campaign, recently praised his father as a genius and statesman but has also been irked by questions about the martial law era.

Marcos has called himself a reluctant politician and in a diary entry his father once said he was worried about his son as a child being too “lazy and carefree”.

As the vote count showed the extent of the Marcos win, Robredo told her supporters to continue their fight for truth until the next election and dismantle “the structures of lies”.

Marcos has given few clues about his policy agenda, but is expected to closely follow outgoing President Duterte, who favoured big infrastructure works, close ties with China and strong growth.