The NYPD said a transit officer patrolling alone on the southbound 3 platform of the Pennsylvania Avenue train station in Brooklyn was attacked at approximately 6:45 p.m. Tuesday by a 24-year-old homeless suspect, later identified as Alex Eremin.

The officer spotted Eremin smoking a cigarette on the platform and asked him to put it out. The homeless man then threw himself down the stairs. When the officer approached him to help, Eremin proceeded to attempt dragging the officer down the rest of the staircase, police said.

A struggle ensued, and NYPD said Eremin made several attempts to grab the officer’s gun.

After several minutes, the officer managed to subdue Eremin and take him into custody.

The officer was transported to a local hospital for treatment and was in stable condition.

Following the ordeal, NYC’s Police Benevolent Association released a statement saying union President Pat Lynch and Mayor Adams “have spoken regarding this evening’s assault on a transit police officer performing solo patrol,” and given what happened, “The mayor indicated that the deployment plan will be modified so that there are two police officers on every train patrol.”

However, in a statement of its own, NYPD said the department was “continuing with the solo patrol concept by spreading officers out on posts with the caveat that they be within sight of one another.”

“This will increase visibility if police officers looking out for the riding public while at the same time looking out for each other,” the statement added, according to FOX 5 NY.

This comes as transit crime in New York City has spiked by more than 54% compared to the same time last year, according to the most recent NYPD statistics, and Adams has previously said the city’s post-pandemic recovery relies heavily on commuters feeling safe enough to take public transport.

Despite recent praise from the mayor, department and state, Lynch had already criticized the solo officer patrol plan last week before its launch, saying in a statement that solo transit patrols were previously “abandoned because they make it harder for cops to protect straphangers and ourselves.”

“They’re even less effective now that criminals know there are no consequences for fighting cops and resisting arrest,” the union president said, saying the new plan will “only accelerate the exodus” of officers leaving the department or putting in for retirement.

“We can’t fix the NYPD staffing crisis by spreading our overstretched resources even thinner,” he added. 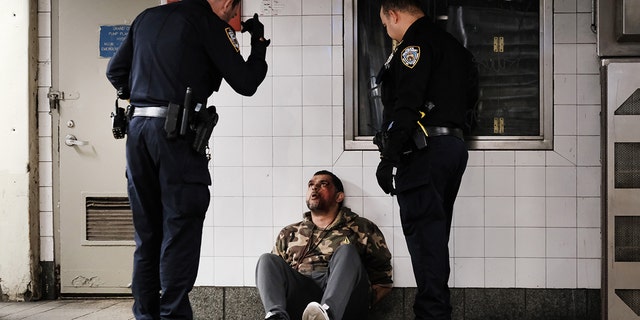 Police detain a man at a Times Square subway station following a call to police from riders on April 25, 2022, in New York City.
(Spencer Platt/Getty Images)

Eremin, who has a history of arrests related to offensive behavior toward police, is facing several new charges over Tuesday’s incident, including resisting arrest and assault on an officer.

The New York Post reported that Eremin was arrested and charged with obstruction of governmental administration in February for allegedly spitting in an officer’s eye in an ambulance.

On May 11, Eremin was charged with several offenses, including second degree assault and resisting arrest, after allegedly lunging at an officer and striking him several times in a shoulder with a closed fist. That same day, he was also charged with third-degree assault in connection to a domestic incident.

For both arrests, Eremin was granted non-monetary release – also known as cashless bail – on May 16. 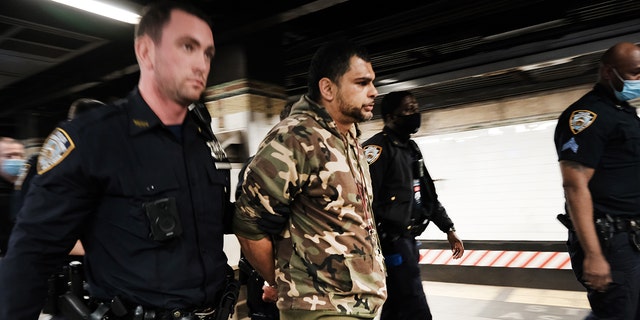 Police detain a man at a Times Square subway station following a call to police from riders on April 25, 2022, in New York City.
(Spencer Platt/Getty Images)

“For many years we had a version of what was called single patrol. I did it as a police officer,” Adams, once a transit cop himself, said. “I wouldn’t have anyone do a job that I wouldn’t do.”

As part of the plan, the mayor said officers would patrol alone at only certain subway stations and would not patrol alone at night. Solo patrols won’t be assigned at the larger stations of Fulton St. in Brooklyn or 34th St. in Midtown, Adams said.

“We are looking at how to better utilize our resources,” he said, according to N.Y. Daily News. “We’re looking at the stations and if we find one where a single patrol is doable, and we’ll do that.”

At a separate press conference in the Bronx, MTA Chairman Lieber said he supported the solo patrol plan and gave Adams “great credit because as an ex-transit cop, he gets it, that seeing a uniformed officer on the train is really reassuring.”

“We want to make sure that our officers are present and spreading them out is one way to do that,” he told reporters. The MTA was asking the prior administration for that. Putting aside the question of how many cops are on the system, we wanted to make sure that cops were deployed to where riders feel vulnerable and that’s on the platforms and on the trains.”