North Korean dictator Kim Jong Un has ordered a nationwide lockdown after acknowledging a COVID-19 outbreak in the country for the first time.

The Hermit Kingdom had claimed a perfect record in keeping the virus out since the stat of the pandemic. The claim has been widely doubted as COVID-19 has spread to nearly every place in the world.

Visitors use binoculars to see the North Korean side from the unification observatory in Paju, South Korea, Thursday, May 12, 2022. (AP Photo/Lee Jin-man)

It’s unclear how many people have been impacted by the COVID-19 outbreak, but experts warn that it could have serious consequences due to the socialist country’s poor health care system. Experts say Kim may have made the highly unusual admission because he may be looking for outside help.

“For Pyongyang to publicly admit omicron cases, the public health situation must be serious,” said Leif-Eric Easley, a professor of international studies at Seoul’s Ewha Woman’s University. “This does not mean North Korea is suddenly going to be open to humanitarian assistance and take a more conciliatory line toward Washington and Seoul. But the Kim regime’s domestic audience may be less interested in nuclear or missile tests when the urgent threat involves coronavirus rather than a foreign military.”

US MARINE’S LIFE IN THE HANDS OF BIDEN, BLINKEN IN NORTH KOREA EXTRADITION FIGHT 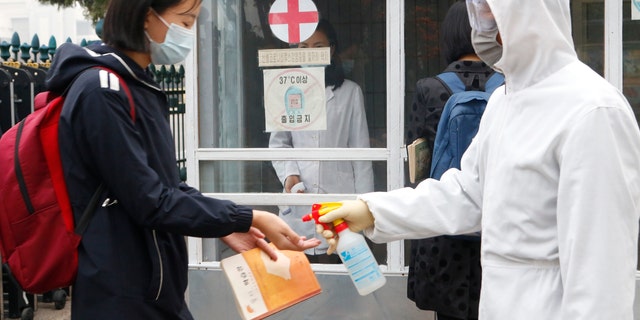 A schoolgirl wearing a face mask, disinfects her hands before entering the Kumsong Secondary School No. 2 in the morning in Pyongyang, North Korea, on Nov. 3, 2021. (AP Photo/Cha Song Ho, File)

Kim was seen wearing a mask in public for the first time since the start of the pandemic on North Korea’s state TV Thursday. Kim did remove his mask to speak into a set of microphones. A photo released by the country’s state media showed Kim sitting maskless around a table with other officials who were still wearing masks. 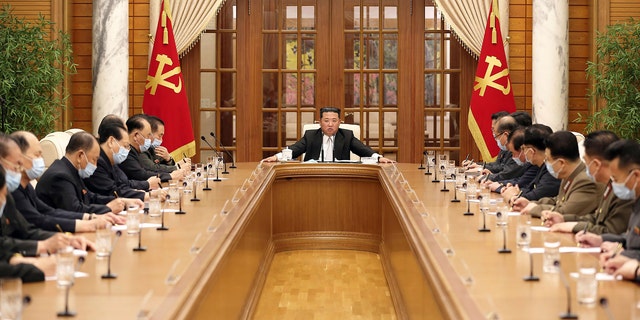 North Korea has maintained strict antivirus controls at its border for more than two years and didn’t provide further details about its new lockdown.

At the start of the pandemic in 2020, North Korea imposed a border lockdown and increased quarantine measures in an effort to prevent a COVID-19 outbreak.

Kim insisted that the country will surely overcome what he described as an unexpected outbreak because its government and people are “united as one.”