A New York family is suing a neighbor for $20 million after he allegedly followed their son home and pulled a gun out in a road-rage fueled encounter on their own front lawn.

A notice of claim filed earlier this week alleges that Douglas Debonet, 32, was involved in a July 23 road rage argument that led to a crash around the corner from his neighbor’s home at the intersection of Old Town Road and County Road 83 in Selden, New York.

Hours later, Debonet allegedly showed up at the home of Dillon Tyme, the driver who crashed, according to the filing. There, he allegedly blocked the driveway and demanded to speak with Tyme.

Tyme “sheltered in place and remained trapped and imprisoned inside” and called his parents, according to the filing.

Video shows the father, Devon Tyme, walking up his own driveway to find an agitated man on his front porch.

“Your son needs to stay away from my house,” the man, identified as Debonet, says in the video.

“The cop is on the way,” Tyme says, walking closer.

After a brief argument about Tyme’s son’s broken side-view mirror, Tyme tells Debonet to “get off my property.”

Something happens off-camera and Debonet steps back.

“Get off of me with the pen,” he says, reaching into his waistband and pulling out a handgun, which he appears to aim at Tyme.

Debonet backs away, lowers the gun and accuses Tyme of threatening to stab him with the pen and Tyme’s son of driving by and “casing” his house.

They continue to argue but Debonet holsters the weapon.

“You cannot be using our taxpayers’ money to behave the way you’re behaving,” Tyme tells Debonet, who had identified himself as an off-duty police officer.

“OK, no problem,” he replies. “Tell your son to stay away from my f—ing house, please.” 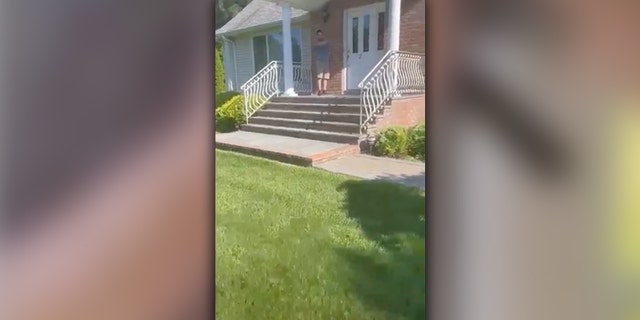 Video shows the father, Devon Tyme, walking up his own driveway to find an agitated man on his front porch.
(Suffolk County District Attorney’s Office)

As the argument continues, Debonet walks back to his car to get his phone, then shows something to Tyme, which he alleges is the son stopped in front of his house.

They argue some more and Tyme accuses Debonet of breaking his son’s side-view mirror, which the officer denies and says the son did it himself by crashing into the car in front of him during the road rage incident.

“He was scared,” Tyme says, a notion that Debonet rejected.

“What am I gonna do?” he countered.

“You’re on my property, [and] you pull a gun on me,” Tyme shoots back.

Debonet faces the rare charge of second-degree menacing and another of fourth-degree criminal mischief, both misdemeanors, according to the Suffolk County District Attorney’s Office.

Public records show Debonet had a single complaint filed against him to New York City’s Civilian Complaint Review Board for abuse of authority in 2017. He was exonerated after an investigation.

His lawyer did not immediately respond to messages seeking comment.

The Tyme family has obtained an order of protection against Debonet and is considering moving out of the neighborhood, their attorney, Stephanie Ovadia, told Fox News Digital.

Dillon Tyme, a former high school track runner and a student at the nearby Stony Brook University, has never had so much as a traffic ticket and had never previously met Debonet, she said.

“There was no prior communication [with Debonet],” she said. “No issues on the block. Everybody liked everyone.”

The Tymes are seeking $20 million in damages on allegations of false arrest and imprisonment, deprivation of civil rights mental suffering and more.