Ethan Crumbley, the Oxford High School shooter accused of killing four classmates last year, will be called to testify at his parents’ trial on involuntary manslaughter charges, a defense attorney said in court on Monday.

“We’re going to call him. We need him to testify to information not related to his actual shootings, but related to extraneous matters that are important in the case,” defense attorney Shannon Smith said, according to Fox 2 Detroit.

“This is not about the defendants wanting to throw their son under the bus or make him look bad. This is about our clients defending the case.”

Prosecutor Karen McDonald argued that they are trying to “highlight his role instead of his parents.”

The revelation came during a discussion about the timing of the trial for the parents, James and Jennifer, which is currently set for Oct. 24.

Smith said that she is concerned about the parents being tried before Ethan, whose trial date has been pushed back to January.

James and Jennifer, who are accused of making the gun available to their son and failing to care for him when he showed signs of mental distress, are each being held on a $500,000 bond. 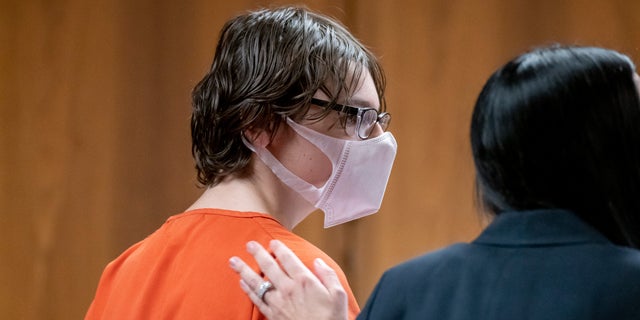 Ethan will be prosecuted as an adult on first-degree murder, assault with intent to murder, and other charges.

“We need him as a witness in this trial. Even if he gets up there and has to plead the Fifth (Amendment),” Smith said in court on Monday.

“He can answer questions that are not covered by the Fifth Amendment. So we can call him as a witness. And I was just thinking that if his trial is scheduled after, I suppose he’ll still plead the fifth.” 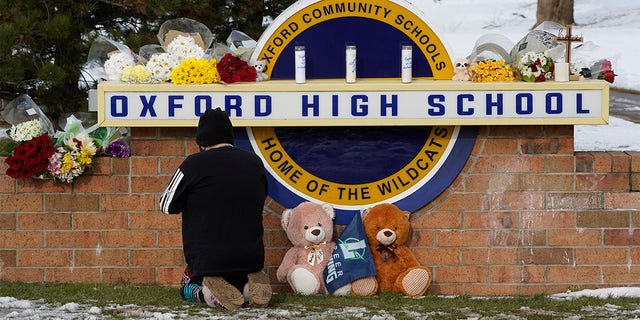 A well wisher kneels to pray at a memorial on the sign of Oxford High School in Oxford, Mich., on Wednesday, Dec. 1, 2021.
(AP Photo/Paul Sancya)

Judge Cheryl Matthews also denied the defense’s motion to move to the case out of Oakland County and ruled that some evidence cannot be used at trial, including Ethan’s internet search history, his mother’s alleged affair, the parents’ drug and alcohol use, and disturbing Instagram posts that Ethan is accused of making before the shooting, according to Fox 2 Detroit.

An attorney for James and Jennifer Crumbley did not immediately respond to a request for comment on Monday.