Prosecutors in Frankfurt and Munich said in separate statements that state and federal police were searching the 24 properties in Bavaria, Baden-Wuerttemberg, Hamburg and Schleswig-Holstein.

The statement by Frankfurt prosecutors named the suspect only as a Russian businessman. But German weekly Der Spiegel, which first reported the raids, named him as Usmanov.

Masked police officers stand on a balcony of a house belonging to Russian oligarch Usmanov during a raid in Rottach-Egern, Germany, Wednesday, Sept.21, 2022. In connection with investigations against a Russian for violation of the Foreign Trade and Payments Act, 24 houses and apartments were searched across Germany on Wednesday. (Matthias Balk/dpa via AP)
(Matthias Balk/dpa via AP)

Two officials involved in the investigation, speaking on condition of anonymity because they were not authorized to do so publicly, confirmed his identity to The Associated Press.

Usmanov is subject to sanctions in the United States and the European Union.

Frankfurt prosecutors said the suspect of their investigation is alleged to have conducted several transactions between 2017 and 2022 using a complex network of offshore companies to hide the origin of the payments, which amounted to millions of euros.

“There is a suspicion that the sums transferred resulted from crimes, in particular tax evasion,” prosecutors said. 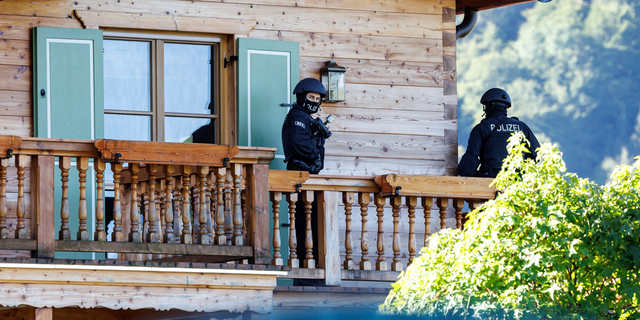 Masked police officers stand on a balcony of a house belonging to Russian oligarch Usmanov during a raid in Rottach-Egern, Germany, Wednesday, Sept.21, 2022.
(Matthias Balk/dpa via AP)

Munich prosecutors said in a statement that their investigation centered on allegations of payments being made to security companies guarding the properties, in breach of sanctions rules.