The man accused of attempting to break into the FBI’s Cincinnati field office on Thursday reportedly handled classified material for the U.S. Military while posted on submarines years ago, and the suspect was previously known to the FBI.

“The FBI previously received information about Ricky Shiffer, the individual who attempted to breach the Visitor Screening Facility at the FBI Cincinnati Field Office on August 11, 2022,” an FBI spokesperson told Fox News Digital in a statement. “The information did not contain a specific and credible threat. However, multiple field offices made attempts to locate and interview Shiffer which were unsuccessful.”

Ricky Shiffer, 42, spent five years in the U.S. Navy between June 1998 and June 2003, mostly aboard the USS Columbia, a Los Angeles-class attack submarine.

The suspect also spent three years in the Florida Army National Guard as an infantryman between May 2008 and May 2011, including a deployment in support of Operation Iraqi Freedom. He was honorably discharged in May 2011, according to his service record from the Department of Defense.

An FBI agent stands outside the scene of an exchange between law enforcement and FBI field office break-in suspect Ricky Shiffer.
(FOX 19)

During those combined eight years, Schiffer handled highly classified information, according to The Washington Post.

Shiffer is suspected of posting extremist views on several social media platforms in which he encouraged his followers to “kill the F.B.I. on sight.” 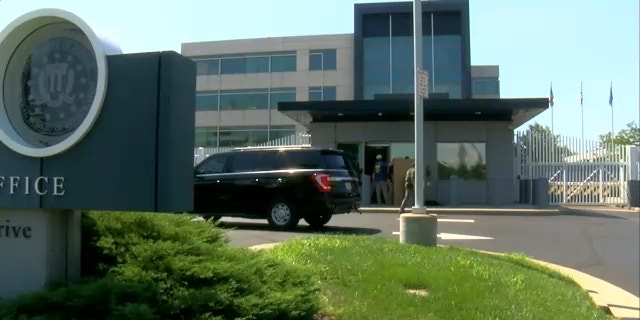 Investigators outside the FBI Cincinnati Field Office after an armed suspect showed and fled the scene.
(WXIX)

The 42-year-old, who reportedly wore body armor while armed with an AR-15 style rifle and nail gun, was shot and killed after he ended the pursuit by pulling over and engaging in a six hours-long standoff in a rural field in Wilmington, Ohio.

Shiffer is believed to have made a post on his Truth Social account 30 minutes into the standoff, during which he admitted to the attack.

“Well I thought I had a way through bullet proof glass, and I didn’t. If you don’t hear from me, it is true I tried attacking the F.B.I., and it’ll mean either I was taken off the internet, the F.B.I. got me, or they sent the regular cops while,” a post by an account using Shiffer’s name stated Thursday. 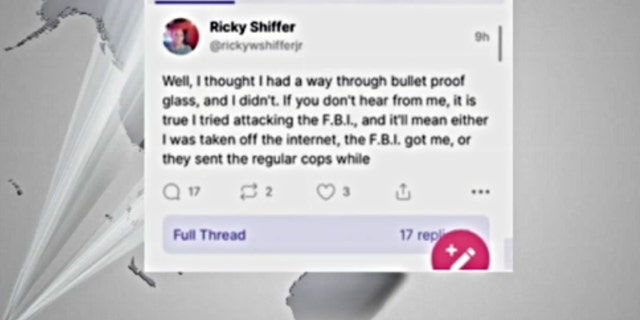 The Thursday incident came after the FBI executed a search warrant at former President Donald Trump’s Mar-a-Lago home in Florida on Monday.

Fox News has verified the posts, and law enforcement is working to confirm who owns the account.

“Truth Social does not tolerate violent threats or incitement on our platform. We work to immediately remove any such posts from Truth Social and cooperate with law enforcement,” the Trump Media & Technology Group said in a statement to Fox News.

The social media platform removed the posts and the account after the suspect was identified.

“Unfounded attacks on the integrity of the FBI erode respect for the rule of law and are a grave disservice to the men and women who sacrifice so much to protect others,” FBI Director Christopher Wray said in a Thursday statement. “Violence and threats against law enforcement, including the FBI, are dangerous and should be deeply concerning to all Americans. Every day I see the men and women of the FBI doing their jobs professionally and with rigor, objectivity, and a fierce commitment to our mission of protecting the American people and upholding the Constitution. I am proud to serve alongside them.”