An upstate New York sheriff described Buffalo grocery store shooting suspect Payton Gendron as the “the most hated man in the country,” as the 18-year-old was indicted for murder in the deaths of 10 people.

In an interview with Fox News, Erie County Sheriff John Garcia said Gendron is being held in a unit separated from the general jail population in a cell that is “suicide proof,” noting how the suspect accused of opening fire at the Tops Friendly Market in a predominantly Black neighborhood in Buffalo is “probably the most notable inmate in this country at this time.”

“Aside from being the most notable inmate in this country, he’s probably the most hated person in this country,” Garcia said. “We would have taken these measures no matter if he had put the R 15 to his head or not.”

Payton Gendron arrives for a hearing at the Erie County Courthouse on May 19, 2022 in Buffalo, New York.
(Scott Olson/Getty Images)

“His clothing is ligature proof. And he does have access like every other incarcerated individual to recreation. He has a room that’s open to him. He’s been watching TV,” the sheriff said. “What we’re not allowing is for him to watch any news coverage that would, in fact, upset his mental state. And he is getting outside, and he’s taking advantage of it. So, he’s been very cooperative and quiet.”

Gendron made a court appearance on Thursday, where assistant district attorney Gary Hackbush revealed a grand jury indicted him on a first-degree murder charge that covers all 10 fatalities in Saturday’s shooting. Gendron, wearing orange clothing and mask, was silent throughout the proceeding and someone shouted, “Payton you’re a coward!” as he was led out,” The Associated Press reported. 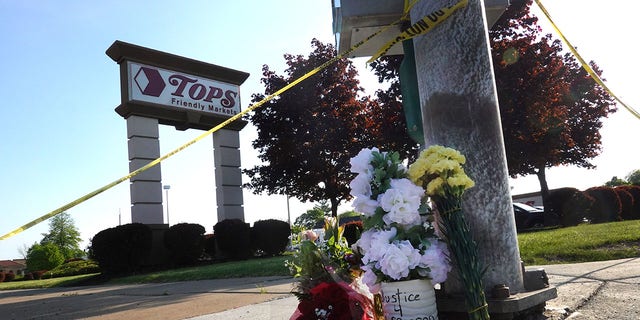 Flowers are left at a makeshift memorial outside of Tops market on May 15, 2022, in Buffalo, New York.
(Scott Olson/Getty Images)

Authorities are continuing to investigate the possibility of hate crime and terrorism charges.

Garcia told Fox News that there is a tunnel connecting county courts to the holding center, and Gendron is fitted with a bulletproof vest when he being transferring to attend court hearings.

“He’s 18 years old. That is, he has so much hate for Blacks, for people of the Jewish religion, for immigrants,” the sheriff added, referring to the allegations against Gendron, and pondering where the suspect got “all this hatred from,” perhaps, “forums and the Internet.” 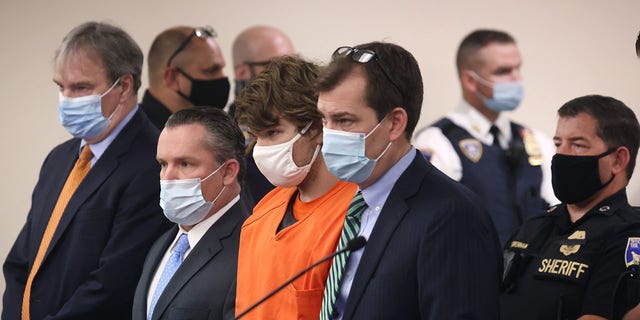 Payton Gendron appears before a judge at the Erie County Courthouse on May 19, 2022 in Buffalo, New York.
(Scott Olson/Getty Images)

Authorities said 11 out of the total 13 people shot during the attack were Black.

Gendron, who is White, allegedly posted a manifesto hundreds of pages long online hours before the shooting detailing his infatuation with the White supremacy ideology.

New York Gov. Kathy Hochul, a Democrat, on Wednesday authorized the state’s attorney general, Letitia James, to investigate social media platforms used by Gendron to determine if they were liable for “providing a platform to plan and promote violence.”