BEIJING – Ahead of Monday’s meeting between President Biden and his Chinese counterpart on the sidelines of the G-20 Summit in Bali, residents of Beijing shared their views on the U.S. – China relationship, Taiwan and their thoughts on President Biden.

The three-hour meeting between the two leaders came a month after Xi Jinping secured a historic third-term as leader of the Chinese Communist Party, although Xi and Biden have spoken on the phone.

“We don’t know much about him,” 26-year-old Zeng told Fox News Digital when asked for her thoughts on Biden, “but he comes off a bit foggy.” Zeng and all others who spoke with Fox News Digital agreed to do so by only using their family name.

“It always seems like he is not quite clear on what he is saying,” another resident who gave his name of Fu told Fox News Digital. “He is a bit too old to be president.”

The consensus of the people spoke to seemed to be that they regretted the deteriorating relationship between the two economic superpowers. Not only because it is limiting people-to-people meetings and travel but also because trade restrictions have hurt both economies.

Zhang said she was glad Biden was in charge calling him a “normal” person in charge,” while saying he was an improvement on former President Trump.

Zhang, a 35-year-old woman from Beijing, said that “I still have a very positive feeling towards the United States. It’s a very powerful and dynamic country. But the things that left a bad impression on me were the way Trump conducted himself and the changes with regard to abortion.” 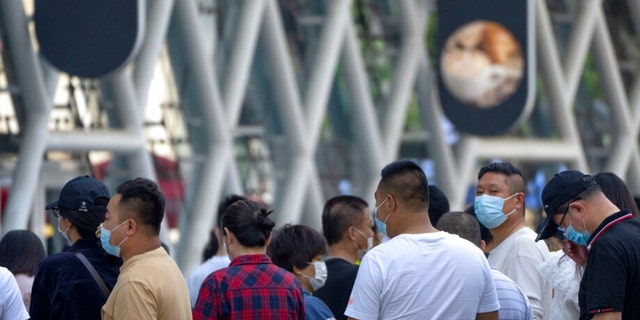 People wearing face masks stand in line for COVID-19 tests at a testing site during the second consecutive day of mass testing in Beijing, Wednesday, May 4, 2022. Beijing on Wednesday closed around 10% of the stations in its vast subway system as an additional measure against the spread of coronavirus.
(AP Photo/Mark Schiefelbein)

Zheng, a 67-year-old retiree, told Fox News Digital that every country, but especially the world’s two economic superpowers had a responsibility to maintain global stability. “When we cooperate, we all win. If we don’t, the common people are the ones that lose the most,” she added.

“In the media, there is a strong sentiment that the United States is not respecting China and the Chinese people and that we should stand up for ourselves,” says Zeng. This “U.S. versus China” narrative is nothing new.

“Many influential people in China, for example, are saying that the power of the United States is declining. Nonetheless, many people still wish to go to the United States,” the 67-year-old pensioner said.

In addition to Russia’s invasion of Ukraine and North Korea’s persistent nuclear threats, Biden also raised the situation in Hong Kong and Taiwan. Ties between the U.S. and China have deteriorated sharply since House Speaker Nancy Pelosi, D-Calif., visited Taiwan earlier this year. China sees the island as a renegade province and responded to the visit with large-scale military exercises.

“I feel like the United States want to divide China,” Deng a 27-year-old bartender stated.

FOR CHINA’S MILITARY PLANNERS, TAIWAN IS NOT AN EASY ISLAND TO INVADE

A People’s Liberation Army member looks through binoculars during military exercises as Taiwan’s frigate Lan Yang is seen at the rear, on Friday, Aug. 5, 2022.
(Lin Jian/Xinhua via AP)

“Perhaps it’s good if the United States first looks at its own human rights issues before it gets involved in those of the people of Taiwan or Hong Kong,” noted Fu echoing a regular line from the Chinese government.

“I was raised to see Taiwan, historically, as a part of China that has to be reunited with the motherland. But now, I think it would be best to leave it like it is. Maybe one day it could serve as a middle ground between Mainland China and the United States”, 28-year-old Zhu added.

“Taiwan is a part of China. In terms of relations with Taiwan, the Joint Communiqué on the Establishment of Diplomatic Relations between China and the United States has clearly stipulated [that]” Zheng said.

Zhang concluded on a note of optimism. “I believe China and the United States should be partners, this would benefit everybody.”

This article was written by Fox News staff.